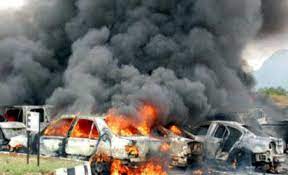 The explosion, which occurred near a private secondary school, Winners School, destroyed a residential building and affected part of the school. The explosion occurred around 9:30 am with many schoolchildren affected.

Videos emanating from the scene showed several injured schoolchildren crying for help while some parents were seen rushing to the scene to rescue their children.

“Where are my children?” one parent shouted.

While some injured schoolchildren have been rescued, others were stranded at the scene before the arrival of emergency responders.

As of the time of filing this report, security operatives, including the army, police, and NSCDC had surrounded the place.

The National Emergency Management Agency and Fire service operatives were also on ground trying to rescue victims of the explosion.

Meanwhile, the Kano State Government clarified that the early Tuesday morning explosion in the Sabon Gari area did not occur in a school.

The state Commissioner for Information, Muhammad Garba, said the incident happened at an animal feed store opposite the school along Aba Road, Sabon Gari area of Fagge Local Government.

He said while the cause of the explosion and the damage had yet to be officially ascertained, an investigation has since commenced to determine the cause, impact and measures to be taken.

Garba called on the people in the state, particularly those living in the area where the incident occurred, to remain calm while the government in collaboration with relevant agencies are working on the matter.

The commissioner assured residents that government would keep the public abreast of any development.