A study has found that Arsenal star Bukayo Saka is currently the best performing Under 21 star in European football.

The 20-year-old is enjoying a brilliant season for the Gunners, helping them in their push to reach next season’s Champions League.

Saka is the club’s top scorer in all competitions with nine of his ten goals coming in the Premier League. 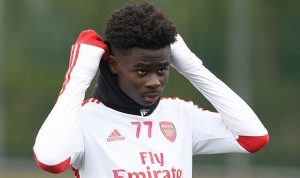 The CIES Football Observatory have published their list of the 100 best performing U21 outfield players from across 32 European leagues this season.

He has bounced back following the disappointment of his deciding penalty miss in the final of last year’s European Championships for England against Italy.

His performances have led Arsenal to fifth in the league, though they could jump to fourth on Monday should they beat Crystal Palace.

Second on the list is Manchester United’s 20-year-old forward Mason Greenwood who hasn’t played since he was arrested in January on suspicion of rape and assault of an 18-year-old student.

The only other names playing in England who make the list are Blackburn’s Rede Khadra (76th) and Levi Colwill of Huddersfield (88th).

One name that surprisingly hasn’t made the top ten of the list is Borussia Dortmund star Jude Bellingham.

Despite scoring six goals and providing seven assists in all competitions, the 18-year-old is only 24th in the list.