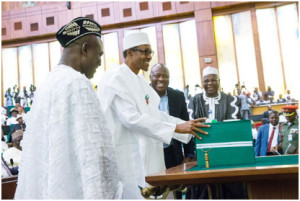 The Senate has accused the Senior Special Assistant to the President (Senate), Senator Ita Enang of doctoring and circulating fake copies of the 2016Budget proposals.

The Senate also vowed not to work on the budget proposal until it receives an electronic copy of the budget document which will be reproduced for senators.

It was also alleged that an attempt to tamper with the budget proposal in the House of Representatives was forestalled by the House, which insisted on the circulation of the original proposals as submitted by President Muhammadu Buhari.

The budget document became an issue last Tuesday when it emerged that the proposal as submitted by the President could no longer be traced. The discovery prompted the Senate to go into a closed-door session following which the Senate Committee on Ethics was mandated to investigate the issue. The issue also led the President of the Senate, Senator Bukola Sarakito meet with President Buhari on Tuesday afternoon.

Saraki confirmed the doctoring of the budget proposals by Enang at the end of deliberations on the report of the Senate Committee on Ethics and Public Petitions on the issue yesterday. According to Saraki, the hard copy of the budget presented to the Senate was different from the one laid before the two chambers of the National Assembly by President Muhammadu Buhari, shortly before both chambers embarked on Yuletide break last December.

Senator Saraki, nevertheless, said the report of the committee fingered the Senior Special Assistant to the President on National Assembly Matters (Senate), Senator Enang, for the act. He said the Senate would as such suspend its initial plan to begin consideration of the 2016 appropriation bill until the Presidency submits the soft copy of the original budget that was laid before the two chambers of the legislature.

His words:“We have received the report of the Committee on Ethics, Privileges and Public Petitions on investigations surrounding 2016 Appropriation Bill. Our finding is that Senator Ita Enang, the Senior Special Assistant to the President on National Assembly Matters (Senate), printed copies of the 2016 Appropriation Bill and brought to the Senate.

‘Budget not missing’
But briefing newsmen, after the day’s plenary, Senate spokesperson, Senator Sabi Abdullahi, said, “The report about a missing budget is not true. We don’t have a budget that is missing. But you recall that the Senate President did inform Nigerians that there is an issue that a committee was asked to investigate. The investigation by the Committee on Ethics, Privileges and Public Petitions, has been submitted in the executive session. It was a decision we took at the last executive session.

“Our findings are these: That Mr. President did lay the budget before the joint session of the National Assembly and thereafter, the Senate went on recess and upon resumption, copies of the document were produced by Senator Ita Enang, who is the SSA to the President on National Assembly Matters (Senate) and the copies were submitted to the Senate and House of Representatives.

“What we found out is that the document submitted by Senator Ita Enang, upon our resumption, has some differences, discrepancies with what was originally laid by Mr. President in the joint sitting of the National Assembly.

“However, the Senate in defence of its own integrity, honour, will not work with what has not been laid on the floor of the National Assembly. We are constitutionally mandated and duty bound to consider only that budget that had been so laid by Mr President.

“Right now, for reproduction, we are awaiting the soft copy of the originally submitted budget so that the National Assembly can reproduce the copy itself. That is the only time we can have confidence in the document we want to work with.

“The budget submitted by the President is not missing; we already have copies of it but what we are saying is that for us to reproduce for our members, it is easier, based on the quantum of document that has to be produced, that we get the soft copy of that original version so that we can reproduce it”.

He disclosed that the Senate has fixed Tuesday, next week to discuss the budget, saying copies of the document would be circulated to senators when the soft copy demanded from the presidency was received.

“By next week, we want to go down to business, senators have picked dates to speak during the three days set aside for debate on the 2016 budget.