Buhari sworn in as President, Promises to crush Boko Haram 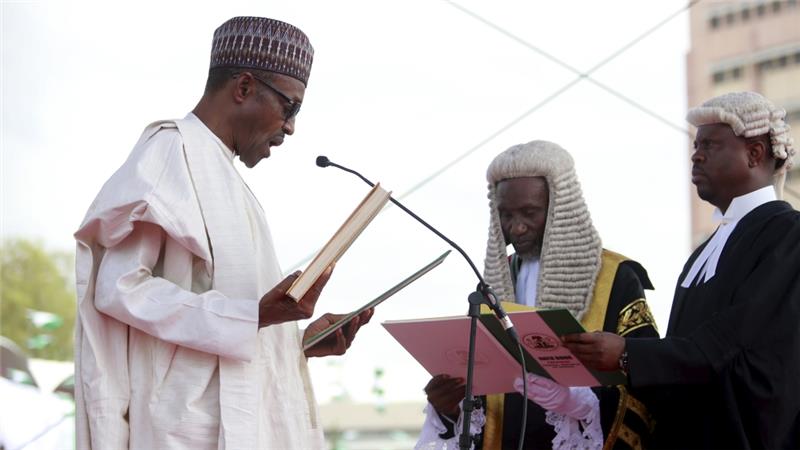 Nigeria recorded a significant milestone in its quest for democratic consolidation on Friday, May 29 when Muhammadu Buhari, who won the March 28 presidential election, was sworn in as its new President.  The ceremony held at the Eagle Square in Abuja was a mixture of military pomp with cultural tradition as the 72-year-old Buhari took the oath of office before the Chief Justice of Nigeria, Mahmoud Mohammed, to begin a four-year term.

Dressed in traditional attire, the new President stood on the stage clutching a Koran in his right hand, as he pledged to uphold the constitution and laws of Africa’s most populous nation. In his inaugural speech, Buhari promised to be a true leader of all Nigerians, devoid of discrimination on the basis of political, ethnic or religious affiliations. “I belong to everybody and I belong to nobody,” he said.

He expressed gratitude to his predecessor, President Goodluck Jonathan for his display of statesmanship in setting a precedent that has now made Nigerians proud wherever they are. “With the support and cooperation he has given to the transition process, he has made it possible for us to show the world that despite the perceived tension in the land we can be a united people capable of doing what is right for our nation,” he said.

President Buhari is taking over the reins of leadership at a time Nigeria is facing significant economic as well as security challenges with the Boko Haram insurgency having devastated towns and villages in the north-east. Buhari has, however, vowed to tackle the enormous challenges facing the country, especially the problems of insecurity, pervasive corruption, the hitherto unending and seemingly impossible fuel and power shortages. According to him, these issues are the immediate concerns of his administration. “We are going to tackle them head on. Nigerians will not regret that they have entrusted national responsibility to us. We must not succumb to hopelessness and defeatism. We can fix our problems,” President Buhari declared.

He said that with depleted foreign reserves, falling oil prices, leakages and debts, the Nigerian economy is in deep trouble and will require careful management to bring back on track. President Buhari identified epileptic power supply as one of the major factors responsible for Nigerian’s poor economic performance over the years and pledged his administration’s commitment towards providing power to Nigerians.  He said: “It is a national shame that an economy of 180 million generates only 4,000MW, and distributes even less. Continuous tinkering with the structures of power supply and distribution and close on $20b expanded since 1999 have only brought darkness, frustration, misery, and resignation among Nigerians. We will not allow this to go on.”

The new President said he would launch an intensified military campaign against the Boko Haram armed group. He noted that although progress has been made in recent weeks by the Nigerian security forces, victory cannot be achieved by basing the Command and Control Centre in Abuja. “The command centre will be relocated to Maiduguri and remain until Boko Haram is completely subdued. But we cannot claim to have defeated Boko Haram without rescuing the Chibok girls and all other innocent persons held hostage by insurgents,” Buhari declared. He promised that his government will do all it can to rescue the Chibok girls alive.

President Buhari observed that  Boko Haram is not only the security issue bedevilling our country and said his government was equally poised to tackle other forms of insecurity like the spate of kidnappings, armed robberies, herdsmen/farmers clashes and  cattle rustlings.

In order to further deepen democracy in Nigeria, the new President said that the Federal Executive under his watch will not seek to encroach on the duties and functions of the Legislative and Judicial arms of government. “For their part the legislative arm must keep to their brief of making laws, carrying out over-sight functions and doing so expeditiously. The judicial system needs reform to cleanse itself from its immediate past. The country now expects the judiciary to act with dispatch on all cases especially on corruption, serious financial crimes or abuse of office. It is only when the three arms act constitutionally that government will be enabled to serve the country optimally and avoid the confusion all too often bedevilling governance today,” he said.

Buhari’s inauguration, before past Nigerian leaders and serving heads of state from across  Africa and  other part of the world , took place 32 years after he seized power in a military coup and was ousted 20 months later. Civilian rule was restored in 1999 but the People’s Democratic Party (PDP) has held power at the federal level for the last 16 years, before Buhari defeated Jonathan in the March 28 presidential election. It is remarkable that this is the first time in Nigeria’s political history that a sitting president would lose election to an opposition candidate.

Buhari and his party, the All Progressives Congress Party (APC) have pledged sweeping change, particularly in job creation, electricity supply and insecurity. But with the dwindling revenue generation as a result of the oil price crash in the international market, Buhari’s ability to deliver on campaign promises may be limited in the short term.

About 30 countries sent high-level representatives for the ceremony. South African President Jacob Zuma attended the ceremony – a sign of Pretoria’s desire to improve relations with Abuja after a series of diplomatic spats under Jonathan, including a wave of attacks on foreigners in South Africa this year. US Secretary of State John Kerry, British foreign secretary Philip Hammond Zimbabwe’s President Robert Mugabe and French foreign minister Laurent Fabius were also at the event.