The elections which took place Thursday, May 28 was the highpoint of the 2015 Annual Meetings of the AfDB held in Abidjan, Côte d’Ivoire.

Dr Adesina,  polled 58.10 percent  of the votes cast to beat his closest rivals –  Kordjé Bedoumra  of  Chad and Cristine Duarte of Cabo Verde  who polled 31.62 percent  and 10.27 percent respectively to emerge the  winner in the sixth round of the three-hour long voting exercise.

Sufian Ahmed  of Ethiopia , Birama Boubacar Sidibé  of Mali, Jaloul Ayed  of Tunisia,
Samura Kamara  of Sierra Leone and  Thomas Z Sakala  of Zimbabwe all failed to make it to the sixth round of the voting that took place  inside Palaise de Congres, Sofitel Hotel Ivoire, Abidjan.

With his emergence as the AfDB President-elect, Dr Adesina has broken the jinx which had made it impossible for a Nigerian to be elected to head the Bank in the past 50 years despite the country’s massive 9.3 percent voting shares. 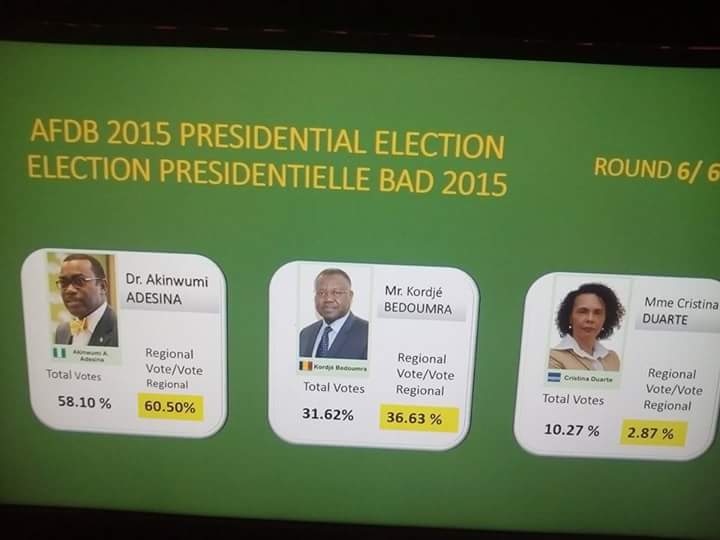 Dr Adesina paid tribute to Dr Kaberuka saying, “I salute the excellent work of President Kaberuka. It will be a big challenge for me to step into his shoes. He leaves a solid Bank behind him.”

The outgoing President, Dr Donald Kaberuka has congratulated Dr Adesina on his election. In his first official response via twitter, Dr Kaberuka said that he was looking “forward to hand over on September 1st. He will do a great job.” 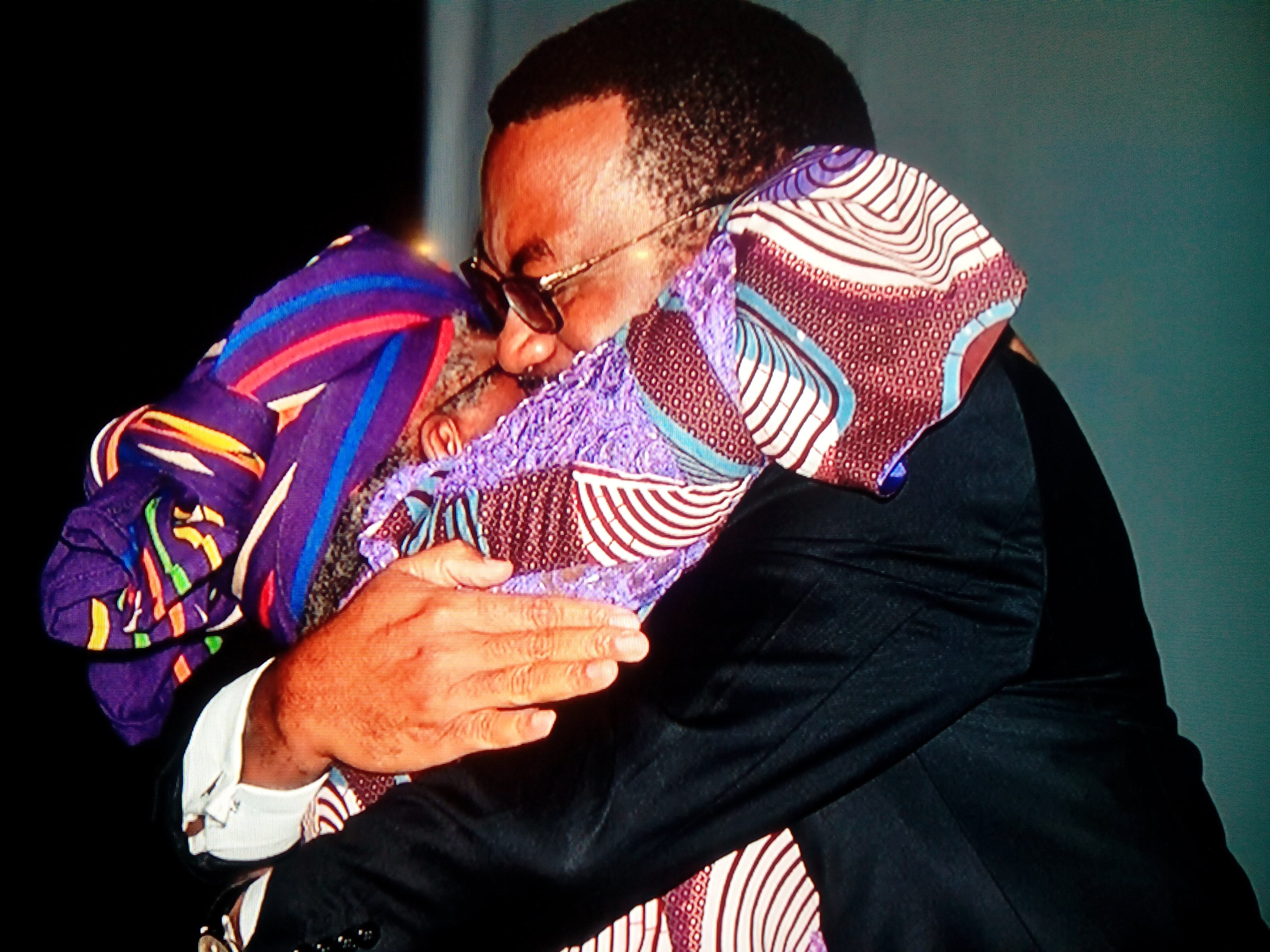 “The result was an expression of the willingness of all the member countries,” declared Albert Toikeusse Mabri, Minister of Planning and Development of Côte d’Ivoire, and Chairman of the Board of Governors of the African Development Bank.

Following his victory at the polls, Dr Adesina will take over the mantle of leadership from Dr Kaberuka on September 1, this year when he will be officially sworn in. The second term of the Rwanda-born technocrat as President of the Bank ends on August 31, 2015. 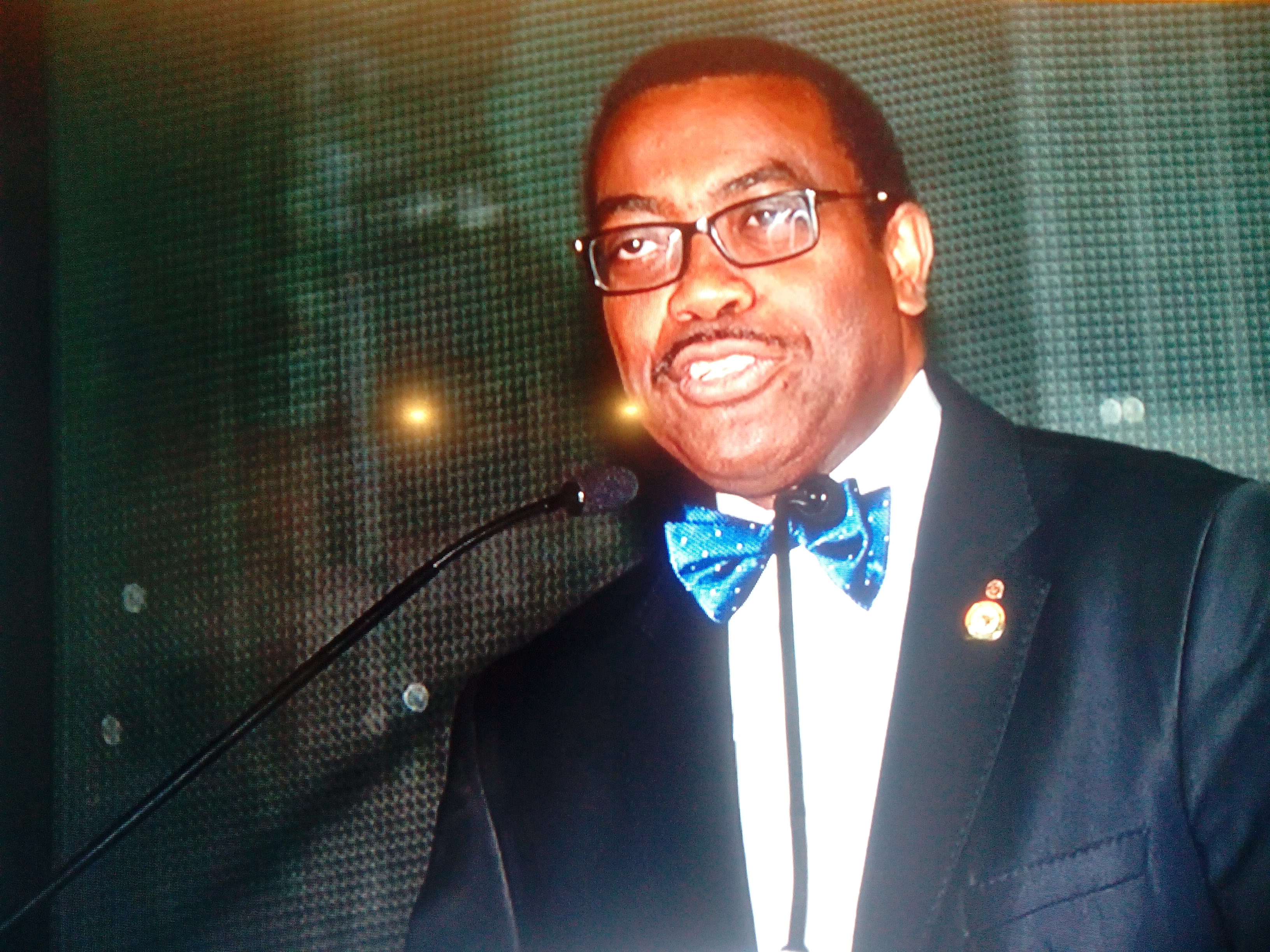 In the past four years, Dr. Adesina served as Nigeria’s Minister of Agriculture and Rural Development; he spearheaded a revolution in the agricultural sector. As a development economist with an excellent pedigree, he has effectively pioneered the unlocking of innovative finance for agriculture which is one of the most crucial enablers for the sector’s growth in Africa.

A bold reformer and firm believer in private sector-led growth, Dr. Adesina has changed the perception of agriculture in Nigeria from that of subsistence and has instead been promoting “Agriculture as a Business.”  This approach has attracted $5.6 billion in private sector investment commitments and is now driving an inclusive growth process will alleviate poverty in Africa and create jobs for its teeming youths. Today, Dr Adesian’s approach to agriculture has become a model for the entire continent.

Prior to his appointment as the Minister of Agriculture, he was the Vice President (policy and partnerships) of the Alliance for a Green Revolution in Africa (AGRA) where he led several bold policy and innovative finance initiatives that leveraged over $4 billion in bank finance commitments towards Africa’s agriculture sector.

He has also held senior leadership positions in some of the foremost agricultural institutions in the world. He was Principal Economist and Social Science Coordinator for the International Institute for Tropical Agriculture, Ibadan (1995-1998); Principal Economist and Coordinator of the West Africa Rice Economics Task Force at the West Africa Rice Development Association (1990-1995); and Assistant Principal Economist at the International Crops Research Institute for the Semi-Arid Tropics. He was Associate Director, Food Security at the Rockefeller Foundation where he was in senior leadership positions from 1998- 2008; Regional Office Director and Representative for Southern Africa. He has published extensively and served on Editorial Boards of several leading journals. 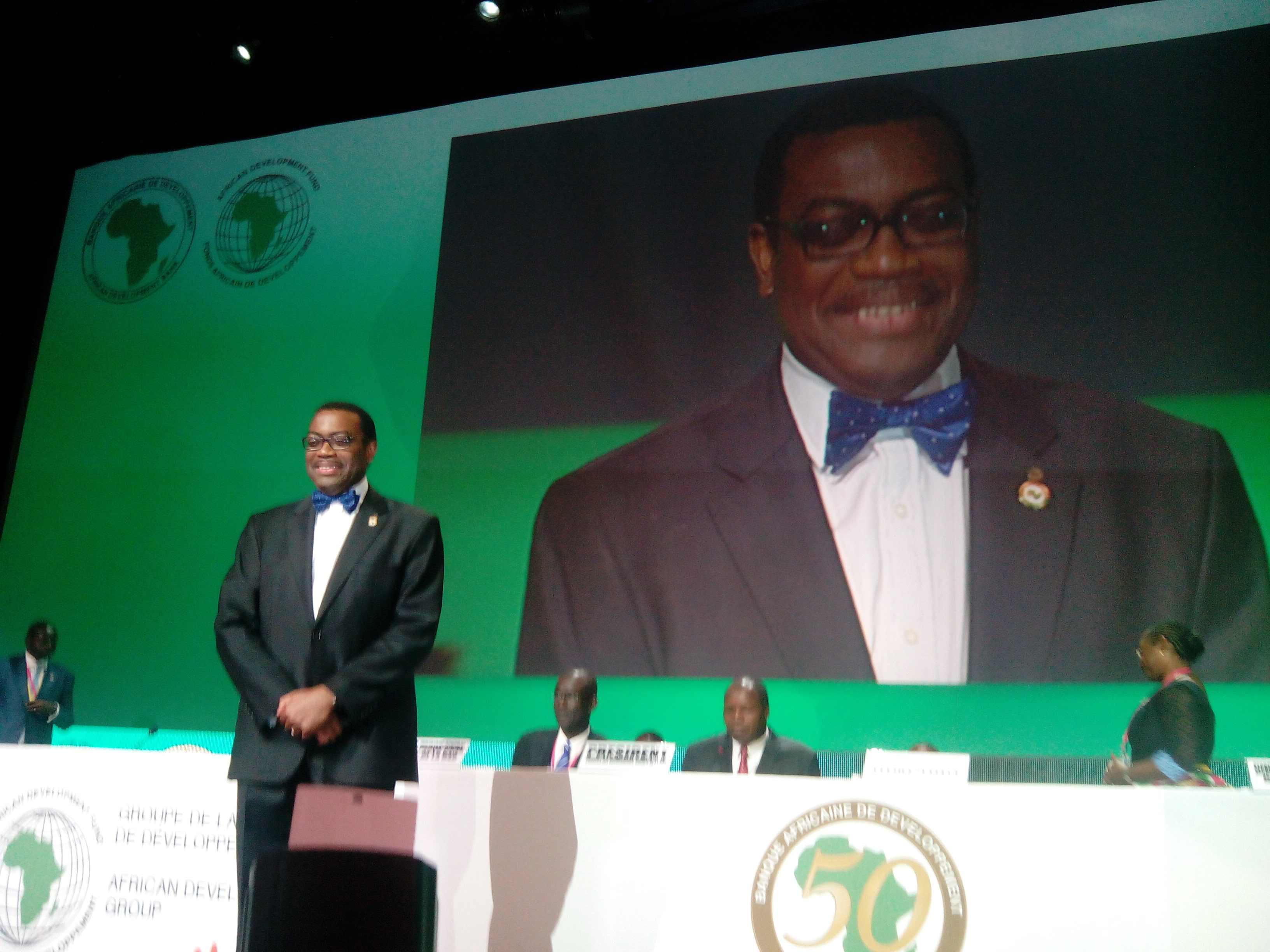 In 2012, he was conferred with Nigeria’s second highest National Honor, the Commander of the Order of Niger, for his outstanding service to his country.

In 2013, Dr. Adesina won the Forbes Africa Person of the Year award for his bold reforms in Nigeria’s agriculture sector. He is the first public sector Minister in Africa to win the award.