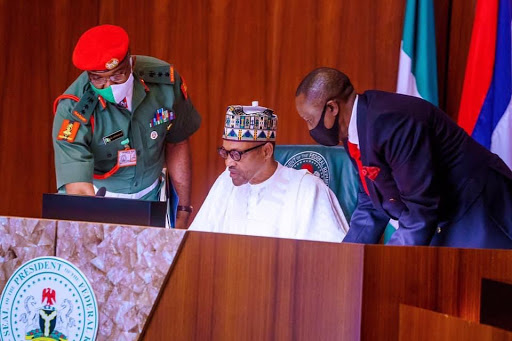 Briefing newsmen yesterday after a high security meeting between the 19 Northern governors, the service chiefs/heads of other security units and President  Muhammad Buhari, the National Security Adviser, Major General Babagana Monguno, announced that the President had directed a re-engineering of Nigeria’s security architecture. This he said was necessary to arrest the rapidly declining security situation in the country.

President Buhari, who has been averse to repeated calls from the National Assembly, some governors and other concerned citizens for a change of the service chiefs, had to acquiesce considering the crumbling security strength of the country. The recent attack on Babangida Zulum’s convoy by suspected Boko Haram insurgents inside Baga town, after receiving an ‘all clear’ signal from the military, was a confirmation that sabotage has prolonged the fight against terrorism in the Northeast. Only last week, during the Sallah celebration, suspected Boko Haramites hurled mortar bombs into Maiduguri town, from their hideouts, which injured many people. Governor Zulum, like former President Jonathan, has always said that saboteurs and enemies of government have frustrated the fight against Boko Haram.

The story is not different in the Northwest and North central, where banditry and militancy have held sway in the full glare of the military who watch as hundreds and thousands of innocent citizens are massacred on daily basis. A few days ago, not less than 76 people have altogether been  killed in Sarbon Birnin in Sokoto State; Ruwan Tofa Dansadua in Zamfara State; Zangonkataf in Kaduna State and Bethel Bible Church in Kogi State.
Professor Cornelius Omonokhua, the Executive Secretary of Nigerian Interreligious Council(NIRC) has bemoaned the spate of killings in the country. This he has attributed to proliferation of arms by merciless insurgents and the victimized groups who are given to self-defense, since government security agencies have failed to protect them.

Also, the lingering war in the Northeast might have been fueled by the mischievous activities of the so-called deradicalized Boko Haram insurgents who were granted amnesty by government. They constitute the supply and information chain of  the terrorists, unknown to government that  freed them.

Let us wait to see the outcome of the re-engineering work on our security apparatus. The new ideas and  fresh blood expected in the system may do Nigerian some good.