President Muhammadu Buhari  has travelled to Yauonde, Cameroon on a two-day visit  to enable him discuss with President Paul Biya in continuation of his consultation with leaders of neighbouring countries on building effective regional coalition against the Boko Haram insurgency.

According to a statement issued by the Special Adviser to the President on Media and Publicity, Mr. Femi Adesina, the talks between Presidents Buhari and Biya over the next 24 hours would focus on the full activation and deployment of the Multinational Joint Task Force against Boko Haram, which had been established under the auspices of the Lake Chad Basin Commission.

“President Buhari, who will be accompanied on the two-day trip by six state governors as well as the Permanent Secretary of the Federal Ministry of Defence and the Director-General of the National Intelligence Agency, will also discuss further joint measures to curb terrorism, violent extremism and other cross-border crimes with President Biya and Cameroonian government officials,” the presidency disclosed. 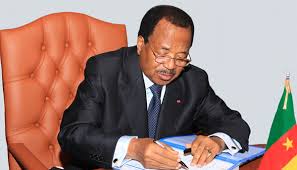 “President Buhari will also use the opportunity of his visit to Yauonde, to meet with Nigerians living in Cameroon,” it added.

The presidential spokesman also confirmed the names of state Governors on the President Buhari’s entourage to Younde as Mohammed Jibrilla Bindow of Adamawa, Emmanuel Udom of Akwa Ibom,  Samuel Ortom of Benue, Kashim Shettima of Borno and Ben Ayade of Cross River as well as Darius Ishaku of Taraba States.

Similarly, Cameroonian Minister of Communication, Issa Bakary, confirmed that security issues would be key agenda of the talks between the two leaders. However, according to Bakary, Buhari and his Cameroonian counterpart,  Biya, will also discuss other issues that will boost the two countries ‘brotherly relationship’.

“The visit would afford the two leaders the opportunity to map out strategies to defeat militants, Boko Haram who have been wrecking havoc in the parts of the two nations. The visit follows the continuing attacks on both countries by Boko Haram,” he said.

President Buhari, who is billed to return to Abuja on Thursday and would also undertake a one-day trip to Benin Republic on Saturday for similar talks with President Boni Yayi. The trip would be used to round-off the President’s diplomatic shuttles to neighbouring countries, which he embarked upon on assumption of office to strengthen regional cooperation against terrorism and make it much harder for Boko Haram to operate across national boundaries.