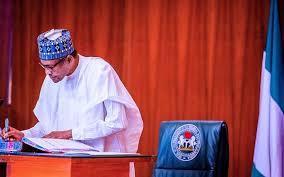 The four new Permanent Secretaries, made up of three men and a lady, complete the list of 16 persons appointed in June this year, among whom 12 persons had been sworn-in more than a month ago. The new Permanent Secretaries are Mr. James Sule from Kaduna State; Mr Ismaila Abubakar from Kebbi State; Mrs Ibiene Patricia Roberts from Rivers State; and Mr Shehu Aliyu Shinkafi from Zamfara State.

Physically present for the FEC meeting after the swearing-in of the Permanent Secretaries are Vice President Yemi Osinbajo, Secretary to the Government of the Federation, SGF, Boss Mustapha; Chief of Staff to the President, Professor Ibrahim Gambari; and the National Security Adviser, NSA, Major General Babagana Monguno (retd). Four Ministers who are physically present are the Attorney-General of the Federation, AGF and Minister for Justice, Abubakar Malami; Minister of Finance, Budget and National Planning, Dr. Zainab Ahmed; Minister of Information and Culture Alhaji Lai Mohammed; and the Minister of State for Budget and National Planning, Mr. Clement Agba. Other Ministers are expected to join from their various offices in Abuja, through video conference.