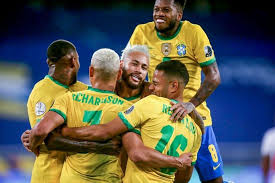 Lucas Paqueta sent defending champions Brazil into the Copa America final with a first-half winner against Peru at the Nilton Santos Stadium.

Neymar beat three defenders on the left before crossing for Paqueta to guide home the semi-final’s only goal.

Brazil, who have won the Copa America every time they hosted the tournament, face either Argentina or Colombia in Saturday’s final at the Maracana.

“I want Argentina, I am cheering them on,” Neymar said.

“I have friends there and in the final Brazil will win.”

Paris St-Germain forward Neymar was a bright spark for Brazil as they again edged Peru, the side they beat in the 2019 final to lift the trophy for the ninth time.

Peru goalkeeper Pedro Gallese made a fine double save from point-blank range to deny Neymar and Richarlison early on.

Neymar’s trickery and ability to find Paqueta with a finely placed pass when surrounded by Peruvian defenders on the left proved decisive in the 34th minute.

Peru pressed for a second-half equaliser, with GianlucaLapadula testing Ederson with a fierce effort, but they failed to upstage the hosts.