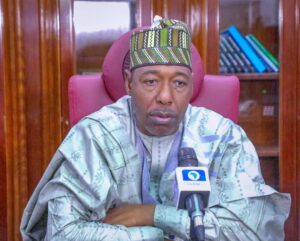 The Borno Government has expressed satisfaction with the growing number of insurgents surrendering to the military in the state.

The State Commissioner for Information, Alhaji Babakura Abba-Jato, disclosed this at the end of an expanded security meeting held on Saturday in Maiduguri.

Recall that the Nigerian Army announced that over 100 insurgents surrendered with their weapons within the past two weeks in Borno.

Abba-Jato said the government was happy with the development and the sustained military onslaught at the shores of Lake Chad and Sambisa Forest.

“The meeting chaired by the Governor is happy with the clearing exercise going on at the shores of the Lake Chad as well as what is going on around the Sambisa general area with some of the insurgents surrendering.

“They (insurgents) are surrendering along with their arms and ammunitions. We will encourage them to surrender and discard their nefarious activities so that they can be accommodated, rehabilitated and integrated into the society,” Abba-Jato said.

He explained that the return of relative peace to many parts of the state has led to restoration of civil authority. He said it has also contributed to the ongoing resettlement of displaced persons back to their ancestral land and expansion of farming activities in recovered areas.

Abba-Jato said the meeting agreed on the need to clear thick bushes along the 85 kilometre Maiduguri-Damboa road that remained closed for several years for reopening.

He commended the military and other security agencies including Civilian Joint Task Force, hunters and vigilante groups for their sustained effort in the fight against insurgency in the state. He assured them of government’s continuous support and collaboration from the public.

The commissioner said that a committee of enquiry has been set up to handle the issue of the clash in Maiduguri between members of a taskforce and some EYN Church members.
The incident led to the death of one person with five others injured.