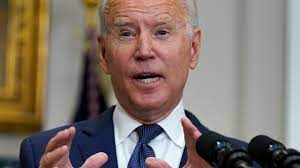 The US forces had conducted a drone strike in Nangarhar Province in eastern Afghanistan, where ISIS-K had a large presence several years ago before being largely ousted by the Afghan military and the Taliban.

U.S said the strike killed an ISIS-K planner and one associate in an isolated area.

On Saturday, Biden warned that the situation on the ground continues to be “extremely dangerous” with another attack “highly likely”.

“This strike was not the last. We will continue to hunt down any person involved in that heinous attack and make them pay,” Biden said.

“Our commanders informed me that an attack is highly likely in the next 24-36 hours. I directed them to take every possible measure to prioritise force protection.”

It could be recalled that the suicide bombing at Kabul airport on Thursday killed about 175 people, including 13 US soldiers.

Earlier on Saturday, the Pentagon said no civilians were hurt during the US air attack that killed two high-profile ISKP targets.

The Pentagon, however, refused to say if the people targeted in the US attack were directly involved in the suicide bombing.

“The fact that two of these individuals are no longer walking on the face of the Earth, that’s a good thing.”

Meanwhile, the Taliban have condemned the US drone attack on ISKP members.

Taliba spokesman Zabihullah Mujahid described the US operation as a “clear attack on Afghan territory”.

Mujahid on Saturday also disclosed that the Taliban will take full control of Kabul airport shortly, once US forces leave, and would announce a full cabinet in the coming days. The U.S has till August 31 to pull out.