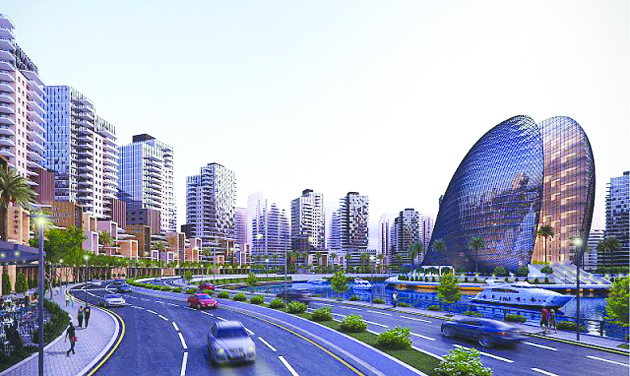 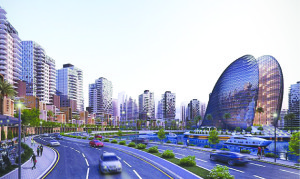 Lagos, which prides itself as ‘the Centre of Excellence,’ is gradually being transformed into a mega city, but environmental challenges stick out like a sore thumb

Returnees to Lagos after a spell of absence would be forgiven for missing their way. Few will doubt that Lagos, which prides itself as ‘the Centre of Excellence,’ is gradually emerging as a true megacity and not just in population but also in infrastructure development.

As far as development of megacities goes, experts say, Lagos has set the pace for other cities in Nigeria. Indeed, the state has proven its number one status in the development of infrastructure and social services. It pioneered the Bus Rapid Transit (BRT) service which moves an estimated 200,000 people daily, according to the World Bank. Lagos is building mega infrastructure that few states dare undertake such as the multi-billion dollar Lagos-Badagry superhighway project that incorporates a light rail project; and the Lekki Free Trade Zone which boasts an international airport. The state has equally embarked on the Eko Atlantic city project, an exclusive residential and commercial city on reclaimed land on the Atlantic; it has upgraded schools and hospitals; the state has the most equipped police force in the country (it recently acquired cars, armoured personnel carriers, helicopters and drones for the police); it has cleaned up its highways and roads even planting trees. Also, Lagos State has reformed governance by pioneering Public-Private Partnership in delivering some public services such as waste management, infrastructure development and revenue collection, among others.

Megacities, according to the UN, are places that boast a population of at least 10million inhabitants. Tokyo, the UN reports, is the largest city in the world with a population of 38 million inhabitants. There are about 28 of such cities in the world today and Africa has seven megacities including, Cairo (Egypt), Accra (Ghana), Khartoum (Sudan), Kinshasa (DRC), Brazzaville (Congo), Nairobi (Kenya) and Lagos (Nigeria). Lagos has an estimated population of 21million. A key factor that has contributed to its burgeoning population is persistent urban migration. Lagos attracts both the young and the old who come in search of greener pastures. The state is viewed as the honey pot where you make it or die trying.

However, experts have identified several factors that attract people to the “Centre of Excellence.” “Lagos is home to head office of Nigerian banks and financial institution as well as corporate headquarters of many companies,” says Paul Phillip Hermann, Managing Director of Lamudi Global, a real estate firm. This financial advantage as well as its strategic proximity to the Atlantic create a magnet for multinationals and small businesses. The size of the market also ensures it serves as a hotbed of ICT innovation in the country. It is the most networked city in Nigeria due to its high internet penetration. It also boasts a cluster of multinationals and other businesses which boost its Internally Generated Revenue (IGR) making the state the highest revenue earner in the country. Indeed, as model of good governance, some states have emulated its revenue generation formula.

Sadly, the march of Lagos to a true megacity is still hampered by environmental and infrastructural challenges. Though the state government has tried to clean up the city, there is still work to be done. Its clean-up of the notorious Oshodi and Obalende areas and the demolition of Badia and Makoko slums have been hailed as a model of modernisation. However, Lagos still experiences environmental pollution on a huge scale. A typical walk across some streets reveal homeless people defecating in the open, stench oozing from the open drains, and regular floods during the rainy season. The state also suffers from housing and water shortages as vendors are often seen hawking pipe-borne water. Street fighting between urchins and commercial transporters is a common feature at bus stops just as gang war between rival cult groups in slump areas of Bariga, Mushin, Ajegunle, Ipaja, Ikotun and Okokomaiko is frequent occurrence. There is frequent building collapse which averages one per week. Noise pollution from electricity generating sets and loud speakers at motor parks also punctuate the boisterous atmosphere at bus stops. The city is congested with vehicles as there is no mass transit infrastructure yet.

Nevertheless, analysts say Lagos is being held back by the general atmosphere of inadequacy in Nigeria. For example, states do not have power over police and electricity generation, which could have probably been done better by Lagos State but for the Exclusive List which, the constitution stipulates, grants power to the Federal Government to provide electricity and ensure adequate policing. “Lagos is like a chained dog struggling to set loose. If there was true federalism Lagos would be a true mega city,” says Fidelis Atani, a real estate consultant.

Lagos could also improve its liveability index if it invests and improves disaster relief and mitigation. Frequent building collapse, fire outbreaks from accidents involving fuel tankers and containers as well as flood disaster dent the credibility of Lagos megacity status. Some states have taken a cue from Lagos in areas of revenue generation, improved governance, local government administration and traffic management. However, there is still more to be done.