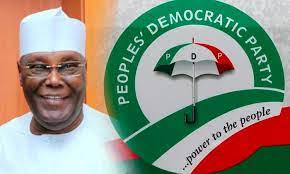 The People’s Democratic Party (PDP) presidential candidate Atiku Abubakar has denied knowledge of the suit brought against him and the party by Governor Nyesom Wike of Rivers State. Also, the People’s Democratic Party through its National Publicity Secretary, Debo Ologunagba, said he was unaware of the case, even as sources at the party’s headquarters acknowledged being served.

According to Mr. Ologunagba, “I’m just hearing about this case from you. I have not seen the process and thus cannot comment on it.”

Spokesman for the Atiku Abubakar Campaign Organisation Mr. Paul Ibe confirmed to newsmen that his principal had not yet been served.

“We are not aware of the case and have not been served. When we are served, we will respond appropriately. However, the response will be done in the proper manner and not through the media,” Ibe said.

The Rivers State governor Nyesom Wike yesterday instituted a court action praying the court to declare him as the rightful presidential candidate of the PDP because of the manipulations by the Sokoto State governor Aminu Tambuwal during the party’s primaries.