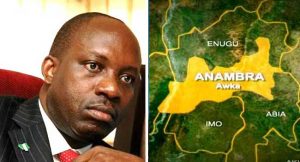 The Independent National Electoral Commission (INEC) has omitted former Central Bank of Nigeria (CBN) Governor, Charles Soludo as well as the Peoples Democratic Party (PDP) from the candidates’ list for the Anambra Governorship Poll. The electoral body released the list of candidates for the November 6 poll on Friday.

But curiously, it instead listed a member of the House of Representatives from another APGA faction, Chukwuma Umeoji as the party’s flagbearer.

INEC’s National Commissioner and Chairman Information and Voter Education Committee, Festus Okoye, hinged the decision on the rulings and court orders served on the commission over APGA’s primary and other processes that led to the election.

A preview of the list also showed that the electoral body skipped the country’s main opposition party.

“The Commission also considered and took cognizance of the Judgments/Court Orders served on it in relation to the primaries of the political parties and other processes leading to the election,” Okoye explained.