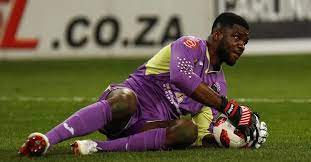 Kaizer Chiefs goalkeeper, Daniel Akpeyi, marked his 50th clean sheet in all competitions in South Africa’s leagues on Sunday in their 1-0 win over Maritzburg United.

The Super Eagles shot-stopper has been impressive for the Amakhosi this season keeping four clean sheets in seven appearances in the DSTV Premier League.

Akpeyi joined Chippa United in the 2015/16 season from Nigeria Professional Football League side, Warri Wolves. The Nigeria international kept seven clean sheets in his maiden season in South Africa in 25 games across all competitions. 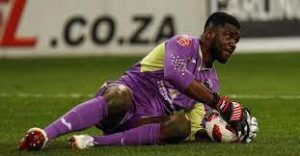 His performance will get better the next season where he recorded 12 clean sheets in 34 games in all competitions. The 35-year-old failed to concede in the three Nedbank Cup games he featured in before his side were knocked out via penalties to Supersports United.

Akpeyi recorded just six clean sheets in the 2018/19 season but his performance for modest Chippa United had not gone unnoticed as he was snapped up by Kaizer Chiefs as a replacement for injured captain, Itumeleng Khune.

His first season with the Chiefs saw him keep 10 clean sheets in 25 league games as he was close to helping the side win their first domestic title since the 2014/15 season as they fell short by two points to Mamelodi Sundowns.

According to reports, the Nigerian is billed to sign a two-year contract extension with the Soweto giants after some impressive showings this season.