Agitations in Southeast: You Cannot Shoot Ideology with a Gun – Soludo

Governor Chukwuma Soludo of Anambra State believes dialogue can go a long way in tackling agitations in the Southeast region.

Soludo made the comment on Sunday, explaining that brute force alone cannot douse agitations in the region.

“A time comes when you realise that you cannot shoot an ideology with a gun. When you see it exclusively as a law enforcement matter, then you miss the point,” the former Central Bank of Nigeria governor said in a television dialogue. 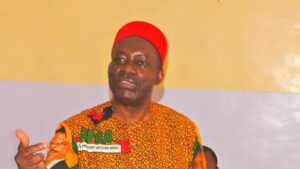 “We got to engage them; we got to engage everyone to really understand the root of this.” According to him, his government is setting up a truth and reconciliation commission as part of measures to tackle the rising levels of agitations in the region.

The commission, he said, will look into the root causes of the agitations and document those killed in the past few years due to tensions in the area.

“We don’t want to treat all these people as statistics,” the governor said, expressing optimism that such action could “form the fulcrum of engagement at the national level”.

“To the criminals, we are offering them an olive branch to repent,” Soludo reiterated, referencing John 8:1-11 in the Holy Bible.

“So, to them, we are also saying ‘We are not condemning you, sin no more. Come out today, surrender those arms, we want to engage you back in society’,” the economist noted.

He lamented the rising levels of insecurity in the country, calling for immediate action and “engagement” with a view to finding a lasting solution.

The governor said the threats are “existential” in nature and thus should not be papered over. Everyone, he believes, should help the government in proffering solutions to the challenges facing the nation.

“This is something that we need to engage very seriously and in an open manner to engage everyone, believing that everyone has something to contribute,” he said.