Renowned Professor of Law, Senior Advocate of Nigeria (SAN) and Chairman, Presidential Advisory Committee Against Corruption (PACAC), Prof Itse Sagay, is worried that the level of insecurity in the country would overwhelm and rubbish the laudable efforts of President Muhammadu Buhari’s regime if the state of insecurity is not sufficiently tackled.

Recently, the legal giant spoke on other crucial issues, including the new electoral act, women agitation for more representation. Excerpts: 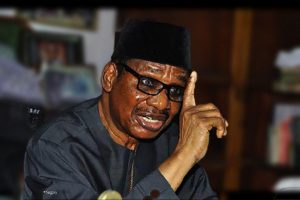 Let’s kick-start the interview with the recent women protest, where they have expressed resentment concerning their representation in the legislature?

I think the level of our women in the legislature is abysmal. I don’t know why, but definitely they need more representation or let me put it this way: Nigeria needs to be more represented because the country is composed of men and women and there are very special gifts that women have which men don’t have. So, we need their complementary ideas and involvement in the best interest of the country. So, yes, there is need for them to be more represented at the national and state houses of assembly.

Some people have argued that the Nigerian women do not have what it takes, the capacity to match the claims of what they are capable of doing. How would you react to this?

I mean that some critics seem to be arguing that you don’t give out positions to them just because they are women, but that they (women) have to struggle for it and work harder to merit the positions they are yearning or agitating to occupy.  Do you disagree?

Let me tell you something from my experience. I started teaching in the university in 1970. At that time, I was teaching law, you could hardly find the women then. In fact, in one of my classes then there was only one girl. Then they were not there,  but gradually the girls started coming. And do you know? They were coming at the top of the class. They were leading with their scores.  It was shocking to me; I didn’t expect it, but they stood out and you cannot take it away from them that they were outstanding. You have noticed the average educated woman does a fulltime job, looks after children, multi-task, far more than the husband. So, I don’t think we should underestimate what women can contribute to the country. They need to be involved more because they are also critical for development.

What is your assessment of the new Electoral Act? Did it cover all that you expected to see in such an Act or did you notice loopholes?

Of course, nothing can be perfect, yes, nothing can be perfect and I think the most important provisions, one or two, but one of them is the electronic transmission of results and the other one is the issue of the card-reader, the validity of card-readers, which the Supreme Court wanted to suppress for no reason I could not understand. Those are the two elements and they are very important. The electronic transmission of the results can be done effectively, then our results will be more honest, will be faster, more accurate and room for electoral fraud will be greatly reduced. There are many other positive points in the Electoral Act, but all together it’s a good one. And my appeal is that operators should strictly adhere to it. Of course, you know that the human element is also there to subvert it, the need to play by the rules; to be guided by its provisions is also key to its success.

I am always worried about the way our politicians are desperate to undermine rules to achieve their victory. Their (politicians) desperation is always too much they will go to any length to sabotage, to destabilize and to undermine it. Even as we think we have brought in a good law to eliminate all their evil fraudulent devises, they will devise new ones to neutralize something that we think is perfect. So, I am worried because the behaviour of our politicians really needs to change for us to have perfect, acceptable and transparent elections. No matter how good the rules are, if the people participating do not have an upright mind, if they don’t have integrity there will be problem.

The impression of most Nigerians is that the country is gone and there is no hope of a united Nigeria…?

(Cuts in) I don’t think so; I think that is a wrong assumption, there is no need to be pessimistic. No doubt, we are having a lot of problems, a lot of challenges right now. For me, the worst of the problems is security problem. It’s very bad that we are witnessing such frequently. That is very bad. I am not sufficiently involved in governance to be able to say we are doing the best that we can. But as an outsider to that extent, I am a little bit impatient with what is being done; I feel we can do better. The bandits and the kidnappers, all the herdsmen and so on, are being given too much leverage by not being tightly monitored and firmly dealt with, particularly, what is happening in Kaduna, Zamfara, Niger etc right now is just too much to tolerate. It’s as if we don’t have security forces, these people are running riots. I just heard in the news this morning that 67 people were killed, I think in Niger State, which is not acceptable. Our government should find that unacceptable. The truth is that the security situation is so overwhelming now that if it is not brought down to a minimal level it may affect the assessment of the success of this our government at the end of it. It may just overwhelm and totally cover up all the immense success that the government has achieved in so many areas, in infrastructure for example, it will cover it, in social development, it will cover it, even the unappreciated successes in the war against corruption it will cover it and quite a number of other good things done by this government. So, we need to bring it (insecurity) down so that the true narrative of the achievement of this government can be properly situated. This insecurity is robbing off or perhaps, rubbishing the accomplishments of this administration.

Have you changed your position concerning the next president of Nigeria coming from the South in 2023?

Of course, no!. It’s the turn of the South. You know we do it zone by zone and the Northern zone will soon complete their eight years and it has to come to the South. I have no doubt about that in my mind, nothing has changed my mind about that.

But not all the political parties are keen at zoning the presidency to the South?

It is only the Peoples Democratic Party (PDP) that is doing that. In the APC, it’s coming to the South.  It is only those who hate Nigeria, the haters of Nigeria that will be angling that the presidency remains in the North, but they will fail. Presidency cannot remain in the North after 2023. There is no way anybody should think that way. I have said it and will repeat it again that advocates of 2023 presidency for the North are separatists. They want to create avoidable problem for the country.