Support groups loyal to Vice-President Yemi Osinbajo on the one hand and those backing the All Progressives Congress national leader, Asiwaju Bola Tinubu, on the other, on Monday, engaged in a war of words on social media, television and radio following Osinbajo’s formal declaration of his presidential ambition.

This is just as it is becoming obvious that the Minister of Interior, Ogbeni Rauf Aregbesola, might support the Vice-President’s ambition. 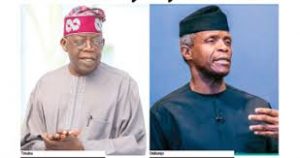 After months of speculations, Osinbajo released a pre-recorded video on social media on Monday where he informed Nigerians of his desire to succeed President Muhammadu Buhari.

The declaration was sequel to a meeting with the APC governors at the Presidential Villa late on Sunday to seek their support ahead of the party’s primary which is expected to take place next month.

In the video, Osinbajo said he believed that God endowed him with many experiences as the country’s number two citizen to enable him to serve better as President in 2023 and beyond.

He stated: “Dear Nigerians, for the past seven years, I have served as Vice President under a true Nigerian patriot, a servant of the nation in war and peace, and a man of integrity, President Muhammadu Buhari.

“We have, together, worked through some of the most difficult times in our nation’s history, but we have remained focused on securing the country, providing infrastructure, and growing our economy. As stipulated by the Nigerian Constitution, our tenure will end next year.

“In this period of seven years, I have served the government in several capacities, and I have, at the direction of Mr President, represented our country in sensitive high-level international engagements.”

Osinbajo, who noted that he had been to practically all local governments in the country, said his interactions with Nigerians and the experiences from those interactions put him in a better position to succeed Buhari.

He added, “I have been in markets, factories, schools, and farms. I have been in agricultural, mining, and oil-producing communities in the Delta, in Kebbi, Enugu, Borno; Rivers, Plateau and Ondo, and in all other states of the federation, listening to the diverse experiences and yearnings of our people. I have visited our gallant troops in the North-East and our brothers and sisters in the IDP camps.

“I have felt the pain and anguish of victims of violent conflicts, terrorist attacks, flooding, fire, and other disasters. I have been in the homes of many ordinary Nigerians in various parts of the country. I believe that the very reason why the Almighty God gave me these experiences, these insights, and these opportunities, is that they must be put to the use of our country and its great people.

“This is why I am today, with utmost humility, formally declaring my intention to run for the Office of the President of the Federal Republic of Nigeria, on the platform of our great party, the All Progressives Congress.”

Osinbajo promised to complete the unfinished business of the Buhari regime, including the quest of radically transforming the nation’s security and intelligence architecture; completing the reform of the justice system focusing on adequate remuneration and welfare of judicial personnel, ensuring justice for all and the observance of the rule of law, rapidly advancing infrastructure development, especially power, roads, railways and broadband connectivity.

He, therefore, called on all Nigerians to support his quest promising to build a country where everyone is given equal access to the abundant opportunities that God has bestowed on the nation.

“I now most solemnly and respectfully seek the support of fellow Nigerians everywhere in this land, and the diaspora, young and old, male and female, in the great and exciting journey that we have ahead of us. I seek your own support,” he added.

Shortly after Osinbajo’s declaration, supporters of the Vice-President took to the streets in several states to celebrate. The drama on social media took another turn as ‘Judas’ trended at number one on Twitter with many Tinubu supporters accusing the Vice-President of betraying his erstwhile benefactor who is also running for President.

The Tinubu supporters also claimed the fact that the purported betrayal was taking place barely days before Good Friday was not coincidental.

The National President, Asiwaju Women Cooperative Society of Nigeria, Toyin Badmus, in a Facebook post, described Osinbajo’s declaration as the “re-enactment of Awolowo vs Akintola in the old Western Region,” adding “The traitor always loses…. Yemi is the traitor.”

A former Publicity Secretary of the APC in Lagos State, Chief Joe Igbokwe, who is also an aide to Governor Babajide Sanwo-Olu, said it was wrong for those who were beneficiaries of Tinubu’s benevolence to contest against him.

In a Facebook post, Igbokwe wrote, “If you are one of the people Asiwaju raised up and you are eyeing the presidency of the Federal Republic of Nigeria, show respect and withdraw from the race.”

Vice-President lost his polling booth, we are not aware of his political relevance – Lagos APC

In an interview., the Publicity Secretary of the APC in Lagos State, Mr Seye Oladejo, recalled that Osinbajo lost his polling unit to the Peoples Democratic Party at the last Presidential election in 2019.

“The only demand is for us to go to the primary. Let us see how much support Osinbajo can garner from the party members. This is someone who could not even win his polling booth. I am not aware of any change in political relevance and popularity since the last elections. I want to congratulate him for finally summoning the courage to throw his hat to the ring,” he said.

But a human rights lawyer, Kayode Ajulo, who is the Convener, Progressive Lawyers for Osinbajo, said in a television programme on Monday that while Osinbajo’s ambition was about service, that of Tinubu was about personal ambition.

The National Coalition Group for Prof. Yemi Osinbajo also called on Tinubu to endorse Osinbajo, adding that Aso Rock was not a retirement home for the aged.

The National Secretary of NCG, Dr Eli Dibia, said this in Abuja during a press conference which he jointly addressed with its National Publicity Secretary, Dr Daniel Onyemaka and National Coordinator, Hyacinth Turnoe.

He said, “We only have one leader in APC in the person of Muhammadu.Buhari. Tinubu is only an aspirant. When you give birth to a child in African culture, it is your prayer that your child will be greater than you. We urge Tinubu to anoint his son so that we can have fresh air.”

Osinbajo’s is close to leadership of our group, we believe in him – Aregbesola’s faction

It was also learnt that the Minister of Interior, Rauf Aregbesola, who is engaged in a feud with his former godfather, Tinubu, might also be part of the Osinbajo support movement as the faction loyal to him in Osun State described the Vice-President as a friend and hailed him on Monday.

A strong supporter of the Vice-President, who confided in us said, “Aregbesola is part of our team. In the next few days, Nigerians will know.”

The leadership of the faction in Osun APC loyal to ex-governor Aregbesola, while speaking with one of our correspondents, described Osinbajo as a ‘friend of the movement.’

Abiodun Agboola, the Publicity Secretary of the faction, while speaking further, said the progressive family in Osun had not decided who to support among the presidential aspirants.

He also said that the faction believed in Osinbajo but insisted that “the Osun Progressive has not officially taken a position, but the Vice-president is very close to the leadership of the group. Very soon the group will state an official position.

“We believe in the Vice-president going by his antecedents and what he has been able to achieve in this administration with his loyalty to the President and the party as a whole. We are happy that he has finally declared his intention to run for the presidential position.”

Asked if Aregbesola would work for Osinbajo’s emergence as the APC candidate, Sola Fasure, the media adviser to the minister, said his principal had not indicated who he was going to work for.

He said, “He (Aregbesola) has not indicated who is going to work for. The situation is still unfolding.”

Also, a coalition of youth groups for Osinbajo rallied support for his presidential ambition come 2023 in Jalingo the Taraba State capital.

The youth groups who blocked major streets of Jalingo for a solidarity walk called on all and sundry to support Osinbajo.

Speaking to journalists after the rally, Philibus Gwagwaje, said Nigeria needed an experienced man who would deliver on the needs of the nation and that Osinbajo possessed the requisite credentials to succeed President Buhari.

In Ondo State, a group, under the auspices of the Yemi Osinbajo Campaign Organisation, expressed delight over the presidential declaration of the Vice President.

Addressing the gathering of Osinbajo’s supporters at the Town Hall, Akure, the Ondo State capital, the Director-General of the Yemi Osinbajo Campaign Organiation, Mr Ifeoluwa Fasoranti, said the group was happy with the declaration.

“We have brought a very marketable and saleable aspirant for the APC and the party must not lose the 2023 presidential election. The race is not about big names but the person with capability and acceptability,”