Ekiti state Governor, Southwest Nigeria, Kayode Fayemi, his Deputy, Bisi Egbeyemi and Minister of Trade and Investment, Niyi Adebayo are to lead the All Progressives Congress (APC) campaign for the June 18 Governorship election in the state.

This is contained in a statement issued by the Ekiti APC Publicity Secretary, Segun Dipe. 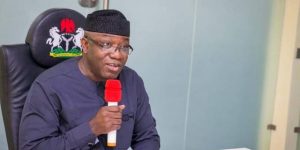 While Fayemi is to lead the 20-member Campaign Council as Chairman, Egbeyemi will as the Vice Chairman while the Candidate’s Advisory Council is to be co-chaired by Adebayo.