The Independent National Electoral Commission (INEC), yesterday, announced it might move sensitive materials from the Central Bank of Nigeria to another location.

Speaking during a consultative meeting with the media, INEC Chairman, Prof. Mahmood Yakubu, while responding to a question on the political ambition and partisanship of Central Bank Governor, Godwin Emefiele, said the commission might be forced to seek alternative arrangement for the handling of sensitive materials. 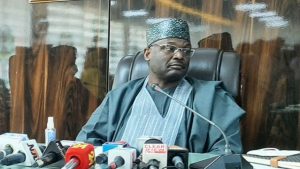 He said the apex bank was responsible for storage and movement of sensitive materials, and that the commission had never doubted its capacity to discharge that responsibility.

“There is a case in court. We have been invited to state our own side of the story. We usually refrain from talking about such issues because they are essentially subjudice.

“But we are already talking about what alternatives are available to us, in case we need to change the arrangement for handling of sensitive materials. We have started thinking about it. We are aware of the situation.

“We will watch the situation. We still have nine months before the next general elections. Things may be addressed before then. I want to assure you that we will not jeopardise conduct of the election by creating a misconception around the situation in the process.”

The INEC chairman also said the commission will deploy both manual and electronic methods in transmission of 2023 election results.”

According to him, the provision of the Electoral Act 2022 on the management of results is still basically manual, involving the recording of results on forms and their delivery to various levels of collation until declaration and returns are made.

He said there was need to clear misconception around e-transmission of results because many Nigerians equate it with electronic voting where polling can take place from any location.

A brief in the implementation procedure for electronic transmission of results giving to journalists at the parley, states that the presiding officer is expected to transmit a clear image of form EC8A (result sheets) for the purpose of collation, which goes to the INEC Results Viewing Portal.

According to the document, the Polling Officer (PO) is also expected to deliver the hard copy of EC8A and the Bimodal Voter Accreditation System (BVAS) to the Registration Collation Officer.

The INEC boss also used the occasion to assure Nigerians that the commission will not succumb to any form of pressure from politicians that might damage the credibility of the general elections.

He said: “It is true that there would be pressure but I want to tell you that we will be consistent with the laws, rules and regulations guiding the process. Here, we are all accomplished people. As soon as I finish this job, there is a job waiting for me in the university.”

On the high cost of party nomination forms, Yakubu maintained that the commission lacks the constitutional power to regulate the price of nomination forms for party candidates.

He, however, said the umpire would partner with Economic and Financial Crimes Commission (EFCC) to checkmate spending of political parties during the poll.

He said: “INEC cannot just arbitrarily apply curbs on expenditure. Some are covered by provisions in the Electoral Act. For instance, the cost of nomination form is not provided by law. But in some cases, like contribution by any major politician to their parties, these are provided by the Electoral Act. Sometimes, it is very difficult to know how much they spend. It is true that we are working with EFCC to see what we can do in the area of campaign financing.”

Yakubu also disclosed that 18 registered political parties have submitted their membership register to the commission.

He added that the commission would soon finalise the document guiding the conduct of future elections, including the forthcoming Ekiti and Osun governorship elections, as well as the 2023 general election.

According to him, beyond the conduct of primaries by political parties, the commission is required to make regulations and guidelines for implementation of provisions of the Electoral Act.

“With regard to the Ekiti and Osun governorship elections, the commission is processing applications by media organisations for accreditation. I wish to reassure you that all applications will be carefully considered and expeditiously treated,” he said.

Yakubu assured that the commission would also work with security agencies to ensure the safety of journalists and their unimpeded access to all voting and collation locations during elections.

Also speaking at the event, President, Nigeria Union of Journalists (NUJ), Chris Isiguzo, commended the courage of the National Assembly for successful amendment of the Electoral Act and final assent by the President.

He called on INEC to remain resolute and not succumb to political actors on the issue of timetable and schedules of activities for the poll.