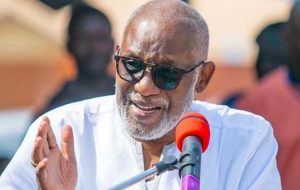 The Chairman  of the South-West Governors’ Forum and Ondo State Governor, Mr Rotimi Akeredolu has declared that those behind criminalities in Zamfara State are not bandits, saying they should rather be regarded as terrorists.

Akeredolu, while receiving members of the governing board of the Federal University of Technology, Akure (FUTA), led by the chairman, Dr Godknows Boladie Igali and the Vice Chancellor of the institution, Professor Joseph Adeola Fuwape, lamented that Nigerians were living in fear stemming from unending insecurity across the country.

He consequently maintained that something must be done urgently to address the situation in order to restore the hope of the people and to make the country a liveable place, so that the young ones will be confident and have hope to live in this country.

He said, “People are living in fear and something must be done urgently to address the situation and restore hope to the minds of the people.

“Look at what is happening in Zamfara. They try to clothe it and call them bandits. They are terrorists.”

Speaking on open grazing, the governor stressed the need for the country to embrace modern ways of animal husbandry, describing open grazing as old and now illegal in the state.

“Today, I can say there are modern ways of animal husbandry and we have to take the bull by the horns. We are not afraid to take decisions.

“Modernity has taught us that you can extract more milk from cows in a modern way better than when you take them from one place to another. It is about science. People have developed that science.”

“Japanese, Chinese and other developed countries send people to where science is the best. We have heard of countries that send their people to the United States to train on science and technology.

“They didn’t stay there. They went back to their country to develop it. Commitment to one’s country is key.

“But we need to make this country a liveable place so that the young ones will be confident and have hope to live in this country.”