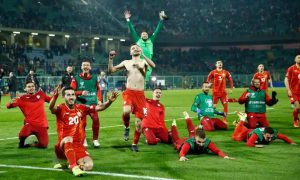 Italy will miss their second World Cup in a row after slumping to a shock 1-0 play-off semi-final defeat to North Macedonia on Thursday.

Aleksandar Trajkovski’s low drive in the second minute of stoppage time stunned the European champions in Palermo and set-up a qualifying final with Portugal in Porto on Tuesday.

The Italians who are highly rated in the world soccer met their ouster in the much touted match which many had already given the victory to the Azuris.