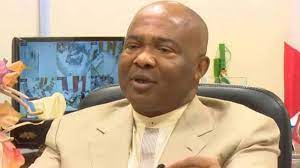 Governor Hope Uzodimma of Imo State has said that peace is inevitable for development and progress to be achieved in the State.

He also added that no amount of blackmail, propaganda, backbiting will deter him from pursuing peace in Imo State and from doing things that will please God, more so as blackmail has been proven to be as old as mankind.

The Governor made at the end of a thanksgiving service in honour of the Hon. Justice Chinaemerem Ucheoma Enyinna Onuegbu, wife his Chief Political Adviser and Head Political Bureau, Barr Enyinna Onuegbu at the Anglican Church of the Pentecost, Area ‘H’ New Owerri on Sunday.

Addressing the congregation at the end of the service, the Governor noted that the synergy between the church and government remains non negotiable because “there is every need for government to seek the prayers of the church for it to succeed,” noting that “when one eye is bleeding the other eye is also bleeding.”

He acknowledged that in Imo it is only God that has helped the State to continue to exist and regretted that “many people have refused to see good things happening even when their eyes are open.”

Making reference to the sermon of day that harped on  “trusting God” and drawn from Psalm 72:12,  the Governor said that it is only God that gives life and as citizens we are having life because God exists.  “Be you a Christian, Muslim, bishop, politician or businessman, God sees all of us and what we do.”

Governor Uzodimma said that Imo State is happy that God has given us life, which is the primary thing.

His words: “Because politics, business, the types of things we do are all secondary and when we live the primary things and do the secondary ones we are deceiving ourselves.

“In the same vain, when we play politics of do and die we are daring God.”

He wondered why people should break their heads over those things they cannot do on their own.

The Governor noted that whenever he listens to the word of God it emboldens him and encourages him to do those things that please God and not man.

He then emphasized that blackmail, conspiracy and backbiting are as old as the existence of man and cannot deter him from doing what he is doing that pleases his creator.

The Governor said he will continue to support the church “because without the church I can do nothing.”

“We need prayers. The church should continue to pray for the families, the state government and Nigeria in general to succeed.”,

The Governor informed the congregation that Imo State has already overcome the spate of insecurity perpetrated in different names by those who swore to make Imo ungovernable for Governor Hope Uzodimma.

Furthermore, he insisted that infrastructural development, promotion of civil servants and the quantum of prosperity expected by the populace can only come in an atmosphere of peace.

He pleaded with God Almighty to continue to protect His people as our helper.

Governor Uzodimma promised that he will stop at nothing in making sure things are done properly in Imo State. “That is why as a Governor I will strive to live legacy for which I will be positively remembered. Governors have come and gone but by their fruits we shall know them.”,

He therefore proceeded to announce a donation of N10 million to assist the Church in the building of their Hall.

Earlier in his sermon, the Bishop of Anglican Diocese of Ohaji/Egbema, Rt. Rev. Chidi Collins Oparajiaku admonished the congregation to always take their problems to God, emphasizing that “God is the helper of the helpless and God opens doors for those who trust in Him.”

The service was attended by top government officials including the Deputy Governor, Prof Placid Njoku, the Speaker Imo State House of Assembly, Rt. Hon Emeka Nduka, his principal Officers and members, the Chief Judge of Imo State, Justice Theresa Chikeka and other top members of the Bar and Bench,  the Chief of Staff, Barr. Nnamdi Anyaehie, members of the Imo State expanded executive council, traditional rulers, business moguls, among others.