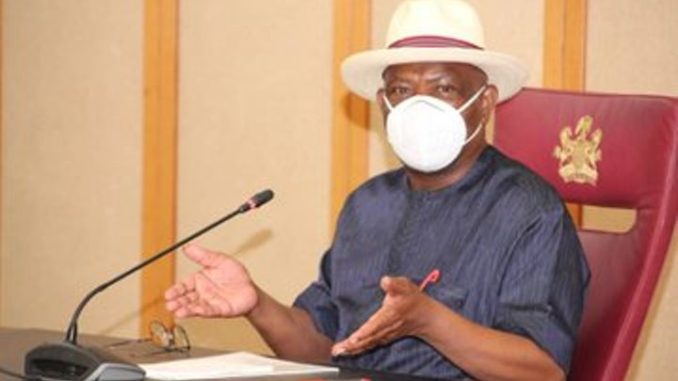 The governor also insisted that Soku Oil Wells belong to Rivers, insisting that the revenue derived from the wells should be paid to the state.

Wike made the suggestion yesterday when he received a delegation of the Revenue Mobilisation, Allocation and Fiscal Commission (RMAFC) on a courtesy visit at Government House, Port Harcourt.

He pointed out that the states bear more development burden and would require more money to cater to the needs of the people.

“This is because the burden is more on the states than the federal government. So, the states should have more revenue to cater for the people,” he said.

The governor described as unfortunate comments by the Bayelsa State Governor, Senator Douye Diri, over ownership of Soku oil wells. He said Soku Oil well belongs to Rivers State and urged the commission to continue to ensure the payment of the accruing revenue to the state.

He insisted that there is a subsisting judgment of the Federal High Court that all revenue accruing from Soku Oil wells should be paid to Rivers State. He added that if Bayelsa State has filed a matter at the Supreme Court challenging the decision of the court, it did not amount to an injunction stopping the payments. The governor commended the commission for taking the bold step to correct fraudulent practices adopted by some states in order to gain financial advantage.

Leader of the delegation, Alhaji Mohammed Kabiru Usman, said they were on an advocacy and sensitisation tour to the state. He said their 2018 verification exercise was characterised by fraud because some data supplied by some states were very spurious. According to him, such over inflated figures were to make those states get money than they actually deserve and deny others.