Why we rejected new version of 2016 Budget- Senate 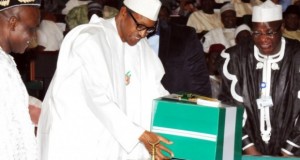 The Senate on Monday said it disowned the second version of the 2016 budget brought to it because it failed its integrity checks.

The upper chamber also described the call by the People’s Democratic Party (PDP) for the impeachment of President Muhammadu Buhari over the budget controversy as “the biggest joke of the year”.

Senate Leader, Senator Mohammed Ali Ndume, told reporters in Abuja that the insinuation that the 2016 budget was missing was erroneous as the Senate did not declare the document missing.

According to him, what happened was that some copies of the budget submitted to the Senate were subjected to “integrity checks” and they failed the checks when compared with the original copy presented to the National Assembly by President Buhari.

He explained that the Senate discovered some loopholes that made it to confirm the existence of two versions of the budget.

Ndume added that the Senate was jolted by the discovery of another version of the document although the strange projects did not affect the sum total of the budget.

The Senate leader explained: “There were issues with the budget that some people were not comfortable with. There were integrity checks and it was discovered that there were some loopholes.

“We asked the Ethics and Privileges Committee to find out what actually happened and it was discovered that there were two versions of the budget.

“It is not that the N6.08 trillion budget Mr. President submitted to us has changed or any of the subheads has changed. They are still the same.

“The President did not submit a failed document. The President submitted a budget, which went through integrity checks.

“I have my soft and hard copies of the budget. I spent most of the weekend looking at the budget.

“What I tried to do was to make a comparative analysis. So, I could not find the difference. But then they told me that the difference is not in the sub-total or sectoral allocation. They did integrity checks and they gave me an example.

“That if a certain amount was allocated to do two things and they felt that the amount can be used to do four things. They said instead of two things, do four. They are still talking about spending the same amount but getting more for it.

“But what I can tell you now is that the budget that was submitted originally, there were certain integrity checks on it that made some changes in the quantity but not in the total.”

On what informed the integrity checks, he said they became necessary to match figures with projects.

Asked when the budget is likely to be passed, Ndume said the Senate was targeting end of February to round off on the budget but for “this mix up,” adding that “we are committed to turning out the budget on time”.

On the call to impeach President Buhari over the budget controversy, he said that the talk of impeachment by the PDP is “the biggest joke of the year”.

He asked: “What are we to do with PDP for what they did to this country in the past 16 years? We are to kill PDP.

“Buhari is the kind of leader we want in Nigeria. The good thing is that now we have a president; before, we had something else.”

On the invitation of Central Bank of Nigeria (CBN) Governor Mr. Godwin Emefiele, Ndume said that the issue of the falling value of the Naira is of concern to the Senate. Ndume added that the Senate wanted to know why the Naira should be N305 to one dollar.

“We want to know the implication of what is happening to the Naira to the country, especially to the ordinary Nigerian and what should be done to reverse the trend,” he said.

Reminded that the existence of two parallel markets for dollar sales might be the problem, he said that Bureau de Change (BDC) operations have become a big employment avenue.

He noted that if the BDC was shut down, what would those engaged in it do? But Ndume added that BDC operations should not be done in such a way as to affect the economy negatively.

On the oil benchmark of $38pb, he said: “We passed the Medium Term Expenditure Framework (MTEF) at $38 dollar per barrel. And now crude oil is selling for $29 at the international market.

“We are praying that every time it goes up. But if it remains like that, we really have to do something. But it’s not something that Senator Ali Ndume will do alone. It is when the Senate sits to consider this issue that I can come back to you again and speak on behalf of the Senate.