WhatsApp Launches ‘View Once’ Feature to Free Up Phone Space 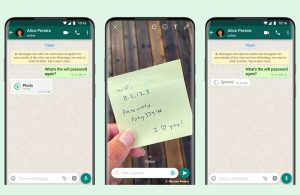 In response to complaints by many subscribers over clogged phone spaces, WhatsApp has launched its “View Once” feature, which deletes photos or videos from your WhatsApp chats after they’ve been opened by the media’s intended recipient. Now, when a user wants to make a video or photo they are sending “View Once” they can tap the green ‘1’ button that is appearing to the left of the send-arrow button. After the recipient opens the media it will be deleted.

WhatsApp has launched its “View Once” feature, which deletes photos or videos from your WhatsApp chats after they’ve been opened by the media’s intended recipient.

The recipient will still be able to see that it is a disappearing photo or video, so users are advised to only really use the feature to send ephemeral media to trusted people as screenshotting is still possible. View Once isn’t for disseminating private information as much as it is to save users space on their phones.

“While taking photos or videos on our phones has become such a big part of our lives, not everything we share needs to become a permanent digital record. On many phones, simply taking a photo means it will take up space in your camera roll forever,” WhatsApp says in the company’s official blog.

While the feature does allow more control over their privacy, most users will make use of it to spare their camera rolls from endless heaps of transitory memes and images, with WhatsApp explaining:

“For example, you might send a View Once photo of some new clothes you’re trying on at a store, a quick reaction to a moment in time, or something sensitive like a Wi-Fi password.”

After the media has been viewed, the message containing it will appear as “opened” to avoid any confusion about what was happening in the chat at the time. They will also be clearly marked with a new “one-time” icon.

WhatsApp says that the feature is being rolled out to “everyone” this week, and is looking forward to feedback.

Hopefully, grandmothers everywhere will take up the new feature to spare storage spaces from the well-meaning barrage of ‘good morning’ and ‘good night’ memes.