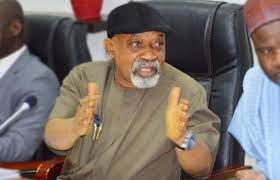 The Federal government says the court order directing the Academic Staff Union of Universities (ASUU) to stop its strike will not prevent negotiations with the lecturers on their demands.

Gatekeepers News reports that Chris Ngige, Minister of Labour and Employment, said this on Wednesday when members of the Nigerian Association of Medical and Dental Academics paid him a visit in Abuja.

Earlier on Wednesday, the Industrial court ordered the striking lecturers to resume at their duty posts.

ASUU has been on strike since February 14 over concerns around university funding, allowances for lecturers, salary review, among other issues.

Speaking on the court ruling, Ngige said the federal government is still open to negotiations with ASUU.

“The court ruling does not preclude us from going on with further negotiation and consultations,’’ he said.

“It is no victor, no vanquished.

“You doctors in academics are for now members of ASUU. But you are here, even though you have dissociated yourselves and you are working.

“We want to thank you for working and teaching your students.”

The minister also spoke on the recent meeting between ASUU and the leadership of the House of Representatives, and commended Femi Gbajabiamila, speaker of the house, and other lawmakers for their efforts.

After the meeting involving the lawmakers, Gbajabiamila had said the leadership of the House of Representatives would hold a meeting with President Muhammadu Buhari on the matter.

“Since the house has showed interest now, it is good and wonderful. When they bring that proposal, the executive will not have any problem,” Ngige said.

“ASUU should also know that this is a step in the right direction. All these things have been promised them by the minister of education at their last meeting.”

“For me, they should do the needful and go back to the classroom.”

Ngige added that the Federal Government would soon direct Vice-Chancellors to reopen the universities in compliance with the order of court.

The Metamorphosis of CONUA