We Will Go Ahead With Implementation of New VAT Law — Lagos 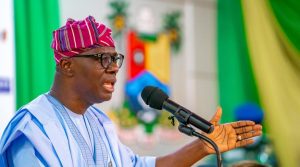 The Lagos State Government has vowed to go ahead to implement the newly signed Value Added Tax, VAT, Law in the state, saying the Court of Appeal order “is not binding on it”. Commissioner for Information and Strategy, Mr. Gbenga Omotoso, made the comment while reacting to the order.

The Court of Appeal had ordered both Rivers and Lagos states to maintain status quo on the collection of VAT, pending the determination of an appeal that was lodged before it by the Federal Inland Revenue Service, FIRS.

However, Omotoso, maintained that the order is not binding on Lagos State as it has not been joined in the suit yet by the court.

According to the Commissoner: “I’m not a lawyer though, but by my understanding from my colleague, the state had only sought to be joined in the Rivers’ state suit and up to this moment Lagos has not been joined in the suit.

“So how does the order concern Lagos, when it has not been joined in the suit.

“We have not been joined in the matter, so the order is not binding on Lagos, it doesn’t concern Lagos.

“Lagos State only filed to be joined as an interested party in the matter.”

The Attorney-General and Commissioner for Justice, Moyosore Onibanjo(SAN), had also kicked against the order for the maintenance of status quo.

He insisted that such order could not be binding on it, since it was yet to be joined as a party in the appeal by FIRS.

The Governor, signed the “bill for a law to impose and charge VAT on certain goods and services” on Friday, shortly after returning from an official trip to Abuja.

Members of the Lagos State House of Assembly had on Thursday, September 9, passed the VAT Bill, 2021 to Mr. Governor for assent into law.

Earlier, the bill went through its Public Hearing stage on Wednesday, which received resounding contributions and support from stakeholders.

The recommendations of the report of the Committee on Finance, were unanimously adopted as the resolutions of the House, leading to its third reading.

Thereafter, the Speaker, Mudashiru Obasa, directed the Acting Clerk of the House, Mr. Olalekan Onafeko to forward clean copies of the bill to Mr. Babajide Sanwo-Olu for his assent.