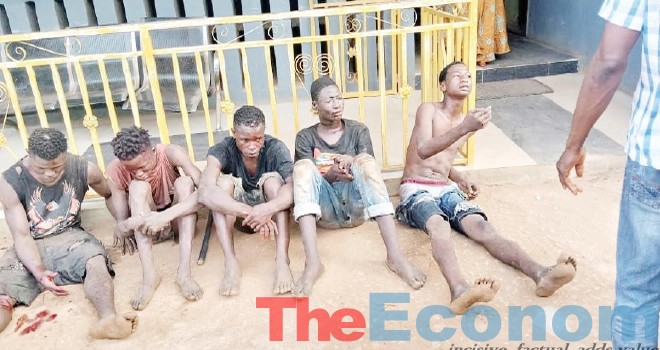 Men of the Ogun State Police Command have arrested five suspected members of a dreaded cult with the corpse of a young man suspected to be a cultist too. 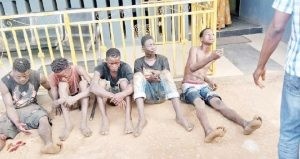 The Police Public Relations Officer in the state, DSP Abimbola Oyeyemi, disclosed this in a statement on Tuesday.

Oyeyemi said the suspects were arrested on Monday following a distress call received at the Sango Area Command headquarters.

He said the police were told that some cultists were seen with a male corpse in a tricycle heading for Ota with all of them holding weapons like cutlasses, cudgels and sticks.

According to him, upon the distress call, the Area Commander, Sango Ota, ACP Monday Agbonnika, quickly mobilised a patrol team to the area, where the hoodlums were seen destroying people’s property and stealing from innocent members of the public on the Ilo Awela Road.

Oyeyemi stated, “The police team engaged and subdued them, and five among them were subsequently arrested.

“On interrogation, they informed the police that they went to a party in Mushin, Lagos and on their way back, a fight ensued among them and in the process, one of them was overrun by a fast moving vehicle and he died on the spot.

“They stated further that they were taking the corpse to the families of their attackers, namely: Omo Ekun, Lampard and Anko, purposely for a revenge mission.”

The PPRO added that the suspects had before the arrival of the police damaged one Highlander SUV with number plate KJA 275 GD belonging to one Emmanuel Adekoya.
The suspects also reportedly snatched an Infinix phone from one Falola Olushola and the sum of N50,000 from one Emmanuel Agbaje.

Oyeyemi said the corpse had been recovered and deposited in the Ifo General Hospital mortuary for autopsy.

He said the Commissioner of Police, Edward Ajogun, had ordered the immediate transfer of the suspects to the State Criminal Investigation and Intelligence Department for further investigation.

Oyeyemi said the CP also appealed to parents to warn their children from partaking in any act that was capable of undermining the peace of the state, warning that such would be met with strict resistance.