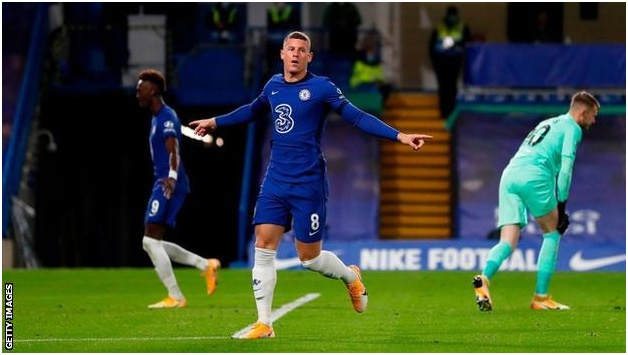 Barkley, who has 33 international caps, has been at Stamford Bridge since moving from Everton in January 2018.

The 26-year-old has played three times for Chelsea this season, scoring once.

“Capturing a player of Ross’s quality is a real coup for our club and I am certain he will thrive here and improve our team,” said Villa manager Dean Smith.

Barkley fires Chelsea into a 2-0 lead against Liverpool

The attacking midfielder has fallen down the pecking order at Chelsea after the signings of forwards Kai Havertz, Timo Werner and winger Hakim Ziyech and is yet to start in the Premier League this season.

He scored in Chelsea’s 6-0 third-round thrashing of Barnsley in the Carabao Cup.

Barkley is the fifth major signing for Villa this summer following the arrivals of winger Bertrand Traore from Lyon, striker Ollie Watkins from Brentford, goalkeeper Emiliano Martinez from Arsenal and right-back Matty Cash from Nottingham Forest.