Imo State Governor, Sen. Hope Uzodimma has challenged elected officials of the All Progressives Congress to embrace sportsmanship and do away with politics of bitterness. The Governor gave the charge on Sunday while addressing APC officials who held a thanksgiving Service at the Government House Chapel Owerri to commemorate the Party’s recently held National Convention that was judged successful. 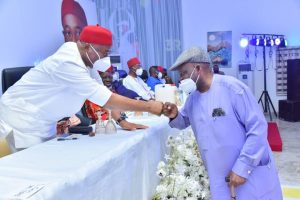 Governor Uzodimma called on the political class nationwide to toe the line of politics without bitterness as political activities build up in the coming months ahead of the 2023 general election.

“Display politics with the spirit of sportsmanship bearing in mind that in every context there must be a winner and a loser, hence whichever comes our way we should accept it as the will of God.”

The Governor recalled with nostalgia the challenges posed by insecurity and the violence associated with evil men in politics and prayed that politicians at every level should drop violence and allow peace to return to the country.

He thanked God for his mercies and favour that made it possible for the elected officials to be alive to witness yet another Palm Sunday in thanksgiving and used the opportunity to reemphasize the determination of his administration and the APC to show governance by example in South East and Imo State in particular.

The Governor expressed determination that through good governance and delivery of dividends of democracy the APC will spread its tentacles to the South South and South West with ease.

“All over the world there are crises and Africa is not left out as Nigeria has its own share,” he said and warned those who delight in causing violence to “desist because you have nothing to gain, rather you will be making your perceived opposition more popular.”

He noted that most of the politicians were in the PDP before moving over to the APC and that they discovered that APC is delivering on the expectations of the electorate and has become a “moving train.”

He also pointed out the verifiable and observable achievements of the APC at both the national and state levels to include the railway, reconstruction of Enugu/Port Harcourt expressway, control of Amucha erosion site, the quality job done at the Okwudor/Njaba Bridge erosion control project and most importantly, the Second Niger Bridge which he said “for over 30 years was a subject of proposition until the APC Government of President Muhammadu Buhari courageously embarked on the project.”

Governor Uzodimma said those fighting the APC are fighting God and those God has made heroes.

He said countries are known by their heroes and most of the heroes are remembered by the legacies they left behind, adding that “as Governor of Imo State, I will be remembered for the construction of Owerri/Orlu and Owerri/Okigwe dual carriage roads among others.”

He advised political leaders to always “think positively, shun violence, evil thinking and reasoning, and assume the position of a Christian-like life and practice those things that God will see and reward one positively.”

He cautioned, for example, that those destroying private and public property because of peanuts they get from enemies of progress will surely be paid back for their evil deeds in their own coin.

The APC Deputy National Chairman (South), Emma Enekwu led other Executive members of the APC at both National and State levels ( Abia, Anambra, Ebonyi, Enugu and Imo) among other prominent persons to the thanksgiving.

At a banquet in their honour, Enekwu thanked Governor Uzodimma for his exemplary leadership that has robbed off positively on the APC both at the national, zonal and state levels.