…Says attack on area aimed at disenfranchising the electorate

The Governor of Imo State, Sen. Hope Uzodimma has reassured the people of Orlu zone that their safety, protection and development will always be of utmost priority to him.

He also said that Orlu people are peace loving, stressing that the recent cases of killings and destruction of property in the zone that has portrayed the area as the epicentre of insecurity in Imo State are politically contrived to disenfranchise the electorate from there. 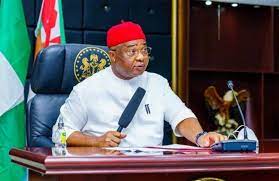 Speaking weekend at Nkwerre Country Club at an event organised by leaders from Orlu zone under the auspices of Orlu Zone Development Forum to find a lasting solution to spate of insecurity in the area, Governor Uzodimma regretted that what had befallen the people was simply an orchestrated attack to cause confusion in the place and render the zone politically irrelevant.

He however reassured his people that with him on the political saddle in Imo State those behind the attacks and agenda to decimate lives and destroy property in Orlu will not succeed.

As part of measures to sustain the many years of development trajectory associated with prominent Orlu people, Governor Uzodimma challenged the leaders to set up a technical committee of eminent sons and daughters who will interface with the State Government with a view to looking into the problems affecting the peace and development of the zone.

The Governor who was invited as the Special Guest of Honour, advised the Forum on the need to set-up a think tank that would develop a blue-print on the needed sustained peace and development in Orlu.

His words: “There is peace in Orlu, rather ‘’Orlu is under attack by perceived enemies of the zone who lost out in the last election and have refused to accept defeat.”

To such politicians he said, ‘’I cannot be intimidated because I have come to serve and would like to be remembered for good governance and lasting legacies that will mark me out from other politicians who are self-centered and self-seeking.”

Governor Uzodimma described the summit as “a reunion that is long overdue,” and thanked the organisers for “the search for sustained and lasting peace because East, West, North or South home is the best.”

“A man is better protected in the midst of his people.”

Governor Uzodimma told his people that they have lost 16 years of developmental opportunities having been governors of Imo State for a consecutive 16 years but without anything substantial to show for it.

He reiterated that God sent him to correct the wrongs of the past, emphasizing that “in my effort to make Imo people and Orlu zone better, no amount of provocation will lure me into killing and letting blood.”

He assured that when he is done with the improvement of the infrastructure in Owerri capital, he will turn his attention to Orlu and Okigwe Zones.

To further show that politicians were the ones attacking Orlu, he said those preventing them from going for their continuous voter registration exercise are enemies of Orlu and Imo State who cannot give what they do not have. “In other words it is a simple way of disenfranchising the people in the forthcoming elections.”

He said with the APC at the State and National levels it is given that Orlu and Imo State would be made better even as he promised “transparent APC primaries in Imo State, devoid of interference and undue influence.”

The Governor concluded by enjoining the forum to collectively work towards improving on the achievements of their fathers and forefathers, saying it is “the only way of assuring the next generation that there is a light in the tunnel.”

In a keynote address, an illustrious son of the Zone, Chief Ralph Obioha assured that the gathering was in search of peace, insisting that they “will find it and will get it.”

Insisting that the causes of violence and youth restiveness among the youths in Orlu are traceable to idleness and joblessness, he proposed the establishment of markets in Orlu that can accommodate 250,000 shops owned by Imo citizens, mainly those who are not properly engaged in Lagos alone.

In their different lectures with topics on – Orlu People and the Challenge of Peace and Development and Orlu Zone and the Case for Technological and Industrial Development by Prof M O Iwuala and Prof Francis Eze respectively, both scholars agreed that the zone is faced with challenges of unemployment, lack of good education, lack of financial empowerment, lack of appropriate markets and inadequate infrastructure, all of which they said “have led to poverty as an intractable, obnoxious and dangerous issues which predisposes them to endemic conflicts, hunger and diseases.”

According to them, as soon as these issues are addressed, the peace and development sought for in Orlu will be achieved.

The convener of the Summit who is also the Chairman of Imo State Council of Elders, Eze Cletus Ilomuanya in his welcome address explained that “the summit is aimed at restoring peace and enhancing development in Orlu zone,” and that it demands collective determination and efforts to address.

He thanked the Governor for finding time to be part of the summit and implored all to participate actively in the interaction to make the Orlu zone better.

The chairman of the occasion who was the former Chairman, National Population Commission, Barr Eze Duruiheoma (SAN), appealed to all to see the summit as an honest invitation towards charting a way forward in peace building and development of Orlu Zone. He also thanked all for being present and wished them a fruitful deliberation.

In a special goodwill message, former Governor Ikedi Ohakim who attended as a friend of the Orlu people warned the zone to be careful not to derail the good work Governor Uzodimma is doing in Imo State.

The summit was attended by many prominent sons and daughters of Orlu zone, most of whom eulogised Governor Uzodimma for the good work he is doing in Imo State, particularly in the area of road infrastructure.

It was also an opportunity for them to unanimously pass a vote of confidence on Governor Uzodimma.