The UN General Assembly voted Thursday to suspend Russia from the UN Human Rights Council, as punishment for the invasion of Ukraine. 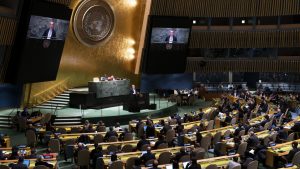 Of the 193 members of the assembly, 93 voted in favor of suspension while 24 voted against and 58 abstained, suggesting weakening international unity against Russia.

It was the second ever suspension of a country from the council. Libya was the first, in 2011.