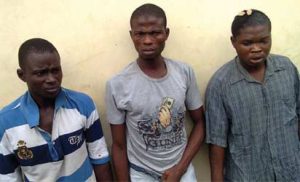 Three suspected cultists have been remanded by Magistrate Paul Ademola of the Tinubu Magistrates’ Court in Lagos for alleged murder.

The suspects, Okiki Raji, Okelia ThankGod and Seun Ademakin, were arraigned on two counts of conspiracy and murder. However, their pleas were not taken by the court.

The prosecutor, Abraham Fadipe, told the court that the defendants, who were members of the Eiye Confraternity, engaged in a disorderly conduct that threatened the peace of Gbara town in Ajah.

Fadipe added that the suspects, while armed with pistols, cutlasses, axes and other weapons, unlawfully killed one Kevin with an axe and a cutlass around 12pm on February 20, 2021, at the Gbara Market in Ajah.

He added that the suspects also killed one Moses around 3pm on the same day at a Celestial Church of Christ in the community.

According to him, the offences contravene sections 411 and 223 of the Criminal Law of Lagos State, 2015.

However, the magistrate refused to take the pleas of the defendants pending legal advice from the Directorate of Public Prosecutions. He ordered their remand and adjourned proceedings till August 30.