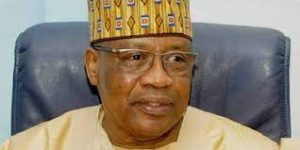 Former Head of State, Ibrahim Babangida has criticized President Muhammadu Buhari’s handling of corruption. Popularly known as IBB, Babangida boasted that he fought graft better than the current administration
He said individuals who worked under him were saints compared to those in power now. The former military president recalled how he moved against a former military governor “who embezzled N313,000”.
“Those who stole billions are walking freely”, Babangida fumed.
Earlier , IBB said that he had already seen the kind of person that would be next Nigerian President. He hinted at a few individuals, whom he said had the capacity to lead the country and effectively run its affairs economically and politically.
According to the former military dictator, bad leadership was a major reason for series of socio-economic challenges the country is being faced with.
IBB pointed out that at this point, Nigeria is in dare need of a leader who connects with the people, tries to talk with them and not the one who “talks on top of the people.”
“I have started visualising a good Nigerian leader. That is, a person, who travels across the country and has a friend virtually everywhere he travels to and who knows at least one person that he can communicate with,” he said.
“That is a person, who is very vast in economics and is also a good politician, who should be able to talk to Nigerians and so on. I have seen one, or two or three of such persons already in their sixties.”