The seizure of pump action riffles 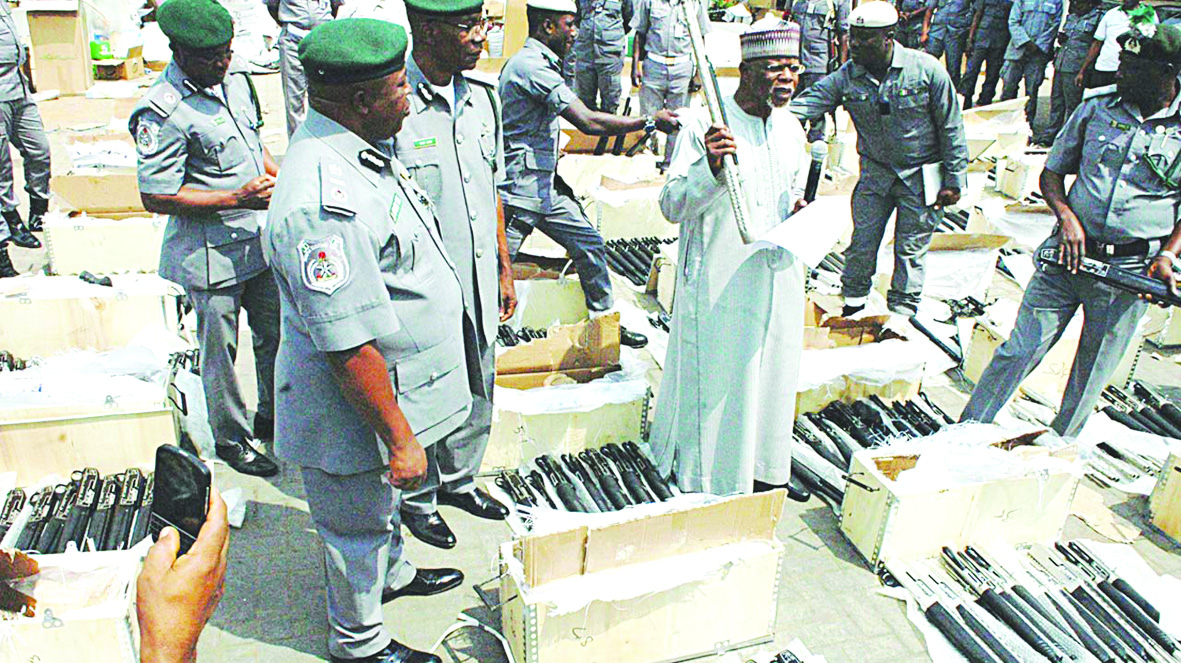 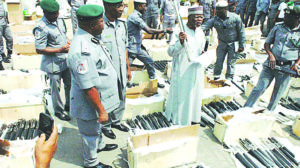 Sunday, January 22, 2017, will remain a memorable day for Col. Hameed Ali, Comptroller General of the Nigeria Custom Service (NSC). On that day, the roving team of the NCS, Federal Operating Unit (FOU), Zone ‘A’, Ikeja, Lagos, intercepted a Mack truck with registration number BDG 265 XG conveying a 40 feet container with number: PONU/825914/3 along Mile 2, Apapa Road, Lagos. The truck was carrying 661 prohibited pump action riffles that were illegally imported into the country.

Ali did not hide his pride for the feat achieved by his officers and men when he held a press conference on the seizure on January 30. “This feat is no doubt commendable and represents the new normal in the service where most officers and men are on a daily basis ensuring that illegalities are not allowed unchecked. I commend the comptroller, all officers and men involved in this great seizure,” Ali said.   He promised to unmask all collaborators in the illegal importation and clearance of the riffles.

The riffles originated from Turkey and routed through China before they were smuggled into Nigeria and falsely declared as steel doors.

As at press time, two officers of the NCS who were involved in the clearance of the container stacked with 661 pump action riffles and other items at Apapa Port   were being detained at the NCS, FOU, Zone ‘A,’Ikeja, Lagos. Similarly, three civilian suspects have been arrested in connection with the illegal importation. The suspects are Mr Oscan Okafor, importer, Mr Mahmud Hassan, clearing agent, and Mr Sadique Mustapha, who was accompanying the container to its destination.

According to him, the importation of riffles is under absolute prohibition in Nigeria. The recent seizure, the NCS boss said, attested to the determination of the NCS “to enforce all laws relating to importation and exportation of goods into and out of Nigeria thereby contributing to the economy, security and wellbeing of the country.”

The seizure of the 661 riffles has brought to the fore the poor state of infrastructure in Nigeria ports, especially scanners used to electronically view consignments inside a container.

“We have problems with the scanners because most of them are not working. We are working diligently to replace them. By God’s grace by the end of this first quarter, we will have scanners at our ports. With the ones we have now, we have done scrutiny on them and two of them can be repaired and put back but we need to replace most of them. Paucity of fund has been part of our problem but we are working diligently to ensure that we get scanners into the ports and the borders. We are working on that,” Ali said, while assuring that the scanners would be repaired before March 31.

The poor condition of the scanners has compelled Customs officers to resort to the cumbersome process of physical examination of goods, which does not help trade facilitation and rendered the stipulated 48-hour speedy clearance of cargoes impossible.

“Customs has pride itself on clearance of goods under 48 hours in the past but because of the unavailability of scanners, we have now propelled our officers to ensure proper examination, although, it is not going to facilitate trade as we want it for security of this country, we would rather go through the pains of conducting examination on every container at the port. We have instructed our officers that no matter what, even if it is only three containers they can examine in a day, they must make sure that any container that gets out of the port is properly screened,” Ali said.

The scanners were installed in 2007 by three service providers namely Cotecna, SGS and GlobalScan, who later handed them to the NCS management.