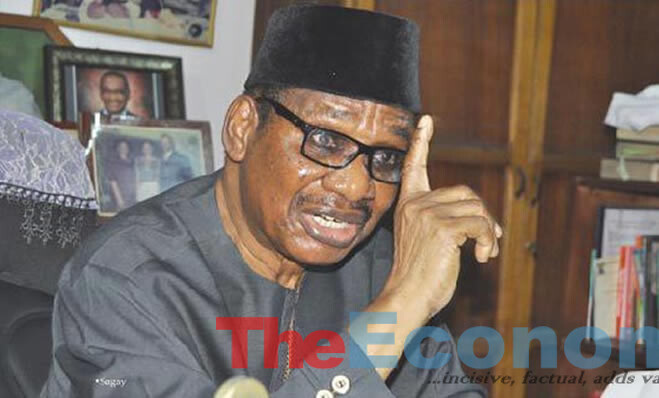 Professor Itse Sagay is a renowned legal scholar and Chairman of the Presidential Advisory Committee on Anti-Corruption (PACAC), a body that advises President Muhammadu Buhari on the fight against corruption. He bares his mind on the crusade against corruption and other burning national issues in this telephone interview with TheEconomyng Assistant Editor Osaze Omoragbon. Excerpts:

What’s your reaction to the recent judgment by a UK court which granted the Nigerian government relief from sanctions and extension to fight the case against Process and Industrial Development Limited(P&ID) claims?

It is a great relief to this country and to everyone because we all knew there was no contract and there was no agreement with P&ID. We knew it was an elaborate fraud concocted by P&ID and a few greedy Nigerians in positions of authority, particularly in the Ministry of Justice. They just got together to make money for themselves. P&ID is an unknown company that is suspiciously registered. Only crooks register companies in Virgin Islands. Why do you run away from your country, Britain and go somewhere else to register a company if you do not have something to hide? Only companies with criminal intents register in tax havens such as Virgin Islands.

P&ID came to this country with a briefcase containing nothing and with a plan to defraud this country with the aid of a few Nigerians and would have succeeded in that scam but stupidly, they allowed their scam to outgrow their original intention and it became monstrous. Therefore, it came to the knowledge of the whole international community and not to talk of the sleeping Nigerian public, or the government and the fight started. That exposed P&ID. Only if they had limited themselves as they used to do, because this is not the first time it has been happening in the Ministry of Justice. Many other adventurers came from abroad in the past, but the proportion of their fraud is nothing compared to this scale. It is that scale that found them out and started the fight and the pushback, and it is going to result in many people going to prison.

You say the P&ID case is not the first time officials are acting against the interest of Nigeria. Can you give examples of other cases?

Of course, there are corrupt officials everywhere, including in the Justice Ministry. We have not forgotten the case of the Malabu oil deal where two former Justice Ministers are standing trial for collecting millions of dollars in bribes to sacrifice the interest of Nigeria for private gains.

Critics see the ongoing investigation of the suspended Economic and Financial Crimes Commission(EFCC) Chairman, Ibrahim Magu as a dent on the anti-corruption crusade. Do they have a point?

This country is a difficult country to serve with all your might. This is a government that came to office in 2015 when corruption was the signpost of the country; it was like the flag of the country. Then, it was like, if you were not corrupt, you were not an elite or a man in power. In the past five years, so much has happened. This government has successfully prosecuted over 3,000 people for corruption and recovered almost N1trillion. It has also recovered about $1billion in loots stashed abroad. This is mainly EFCC’s recovery. The Independent Corrupt Practices Commission (ICPC) has also done its fair share in recovering loot. The ICPC has beamed its search light on constituency projects, and about 500 abandoned projects are now being executed. The monies for those projects were appropriated but they were pocketed. Now, they have returned to those projects. In some cases, expensive equipment like MRI machine, andambulances that many hospitals cannot afford in Nigeria were bought and kept in the homes of lawmakers. The ICPC has recovered and returned them to the communities they were supposed to serve. Several properties, including cars and houses, have been forfeited. Now, the fear of ICPC is the beginning of wisdom for people who ask for constituency projects and do not perform. Civil servants now are also on their toes.

What is your take on the call by Nigerians including members of organised labour for the Federal Government to reverse the increase in the pump price of petrol?

I am so highly puzzled about Nigerians. That is why I say Nigerians are very difficult to rule and I feel sorry for the top people in government like the president, vice president and ministers. I say so because before this outcry, the same Nigerians, especially the elite, have been saying subsidy is a waste of money. They said it was an unnecessary depletion of the nation’s resources and the money could have been used for other pressing needs such as building roads, bridges and infrastructure and asked government why waste the resources on subsidising people. They shouted themselves hoarse and now that the government has acceded to their request, suddenly they have changed tunes. For them, subsidy has become the Holy Grail that must be maintained, otherwise this country cannot survive. Now, what do you want the government to do? What sort of country is this? What sort of cacophony is this? Why can’t Nigerians make up their mind? Everyone is talking and confusing everybody, and no one knows what they want. People who cannot determine what they want are ungovernable. I think Nigerians are becoming ungovernable. They have to make up their minds. This is the government that has been subsidising petrol and they cried that it should be removed and now, they want to bring the roof down. What do you want the government to do? Honestly, I am confused about Nigerians.

ASUU will fail in its quest to stop IPPIS. For the first time, ASUU is fighting to carry on with corruption. ASUU wants to perpetuate corruption where a person receives 10 salaries from the same job and ghost workers abound. ASUU is isolated on this issue and if they like, let them strike for 10 years. Nobody is going to pay ASUU unless they enrol on IPPIS so that when you are collecting a salary, we know that is the only thing you are getting. ASUU will not be an exception, and the earlier they stopped fooling themselves. If I were government, I will make sure that anybody that is not registered under IPPIS is not paid. So, let them do their worst. Their moral position is so bad, and it is condemnable. It is shameful and I have never seen ASUU in such a disgraceful situation by supporting corruption, which is what is doing.

What level of cooperation has the judiciary given in the fight against corruption?

Generally, the judiciary, especially at the highest level, the Supreme Court, is very good at technical law but totally missing when it comes to justice. They are not good at dispensing justice. They are not doing justice because they do not look at the outcome of their decisions on how it affects society and how it makes the country better. They apply technicality. The aim of the judiciary is to dispense justice and they are not doing that. For me, the judiciary is failing big time as of now. They have completely left the path of justice and are pursuing a very wrong path for administration of justice. When people leave the court feeling justice has not been done, they lose confidence in the judicial system. Indeed, because of this, people have lost a lot of confidence in the judiciary. The judiciary has derailed as far as dispensation of justice is concerned.

Take the Orji Kalu case where a conviction that was obtained after 11 years of trial was set aside by the Supreme Court just because the judge who gave the judgement was promoted to the Court of Appeal (just before the judgment), thus callously thrashing 11 years of trial and letting the guilty go free with Nigeria’s resources. The merit and substance of the judgment was never challenged and all this despite a National Assembly Act permitting promoted judges to go back to complete partly heard cases.