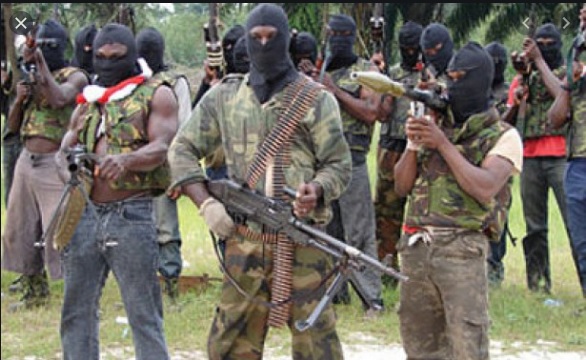 Following the increasing rate of kidnapping in the country, with the Lagos-Ibadan Expressway becoming a major flashpoint in the South-West, the police and the Amotekun Corps have announced major operations to flush out kidnappers and other criminals from forests and other strategic locations in the region.

The security agencies vowed to leave no stone unturned in ridding the South-West of criminality.

Independent of abductions in the different states in the region, there have in recent weeks been a series of kidnappings and attacks on the busy highway that connects Oyo and Ogun states with Lagos, with the latest incidents recorded on Tuesday and Wednesday.

On Wednesday, gunmen emerged from the bush and attacked travellers, dispossessing them of their valuables in the process before they fled back into the forest.

Earlier on Tuesday, a Lagos-bound 18-passenger bus was attacked close to the Sagamu interchange. The incident left some passengers with varying degrees of injury.

About a week earlier, some travellers, including a former Deputy Vice-Chancellor of the University of Ibadan, Prof Adigun Agbaje, and a student of the Moshood Abiola Polytechnic, Abeokuta, Ogun State, were abducted close to the Sat Guru Maharaji Garden in Ibadan, Oyo State capital. They were not released until their relatives paid ransom to the kidnappers.

In their response to the rising attacks, the various security outfits said they were making efforts to address insecurity in the region.

In Ekiti State, the Police Public Relations Officer, Sunday Abutu, said law enforcement agents had in the last two weeks been combing the forests with a view to ridding them of criminals.

He stated, “For over two weeks now, policemen have been combing the forests in the state. It is ongoing and it will continue so as to ensure that criminal elements do not infiltrate the state or our forests.

“As I speak with you, our men are combing the forests and ensuring that the criminal elements are possibly arrested or chased out of the state. We have made some breakthroughs.”

Similarly, the Amotekun Commandant in the state, Brig. Gen. Joe Komolafe (retd.), said officers and men of the corps were embarking on constant monitoring of the forests as well carrying out special operations to flush out criminal elements.

He said, “We go on regular patrols. At times, we go with other security agencies and sometimes we go alone. We will be proactive and not reactive. We are also collaborating with the locals, hunters, traditional rulers and other vigilance groups, because they may see these people before we see them. We have friends and colleagues among them, so collaborating with them will give us early warning.

“What we are trying to do is to reduce criminality to the barest minimum. Don’t forget that there is no fence that separates forests in Ekiti State from those in the neighbouring states. We are also patrolling the forests to ensure they do not come back and see to it that others do not infiltrate through the boundaries.”

The spokesman for the Nigeria Security and Civil Defence Corps in the state, Tolu Afolabi, said apart from the activities of the Agro Rangers Unit, the corps was working in synergy with hunters, Amotekun and other security agencies to make sure that forests in the state and those in adjoining states were well secured.

He added, “We have been doing this for a very long time and it has been yielding good results. Ekiti State has expansive forests bordering other states and our agro rangers are always there on patrol and surveillance, combing the forests to make them uninhabitable for the men of the underworld, including kidnappers.

“Recently we combed the forests from Ikere-Ekiti to Ise-Ekiti and to Ijan-Ekiti, routing the criminals and we are doing that on a routine basis, making sure the places are not habitable for kidnappers and armed robbers.”

While admitting increased presence of security agents in the area lately, a resident of Ijan-Ekiti, Daniel Ojo, said more still needed to be done to secure the area, adding that they should be thorough in flushing out squatters from the forests.

A farmer in Ikere-Ekiti, Debo Fashikun, said he had not noticed additional security agents in the area except the regular patrol teams of the police and Amotekun, but conceded that forests were wide and that they might be in some other locations.

Meanwhile, the police in Ondo State said they were making efforts to ensure that bandits did not have their way in the state.

The state Police Public Relations Officer, Mrs Funmilayo Odunlami, in an interview with one of our correspondents, said, “We have put our men at strategic places on the highways and the towns. Men of the state Criminal Investigation Department, Safer Highway and Highway Patrol have been deployed across the state.

“We also have secret investigators everywhere. For us in Ondo State, our highways are safe for anybody who wants to travel.”

The Senior Special Assistant to Governor Rotimi Akeredolu on Security Matters, Alhaji Jimoh Dojumo, also said the state government had put all the security agencies on red alert. He explained that criminals would not have their way in the state as measures had been put in place to prevent them from carrying out attacks.

“All hands are on the deck; we are coordinating security properly in Ondo State. The governor has put everybody on red alert. We are not relaxing and there will be no cause for alarm,” he stated.

Some residents of border communities in the state confirmed the presence of Amotekun personnel and other security agents in the areas.

The state police command and the Amotekun had earlier stated that they had increased border patrols to prevent the influx of terrorists and bandits from entering into the South-West through Ondo State.

The traditional ruler of Imoru community in the Ose Local Government Area of the state, which borders Edo State, Oba Rotimi Obamuwagun, confirmed that the issue of insecurity in the area had drastically reduced.

He said, “We have to commend the Amotekun Corps; if not for them, I don’t know what would have become of our community here. I can tell you that we are feeling the impact of the Amotekun people here. The cases of insecurity, particularly, kidnapping, have gone down. Though we have some occasional security challenges; we are better off now than before.

“In recent times, there have been more security agents in our community, especially Amotekun men. I have to commend the governor for the Amotekun initiative. As I am speaking to you, my subjects have started returning to their farms, which they abandoned when the issue of kidnapping was prevalent.”

A community leader in  Afin Akoko, Akoko North-West Local Government of the state, Alhaji Ibrahim Kilani, said kidnapping and other forms of banditry in the area had drastically reduced as a result of the presence of more security agents in the area.

Kikani said, “We are seriously relieved. We now see men of Amotekun, the police and other security agencies in our area. The local hunters and villante groups are also helping them . We do have the area commander of the Ikare Area Command, leading the policemen and Amotekun people in the forest. This effort is yielding results, we now sleep and travel in rest of mind in our area here.

The monarch of Auga community in the Akoko North East Local Government Area of the state, Oba Samuel Agunloye, also confirmed the activities of security agents in the border town.

Meanwhile, the Amotekun Corps in the state has arrested no fewer than 38 persons for their involvement in various criminal activities. The suspects were said to have been apprehended in various parts of the state.

Speaking with one of our correspondents on the development, the Commander of the corps, Adetunji Adeleye, said the arrests were part of the ‘Operation Gbale Gbako’ embarked on by Amotekun to rid the state of criminals.

Parading the suspects at the headquarters of the corps in Alagbaka, Akure, the state capital, on Friday, Adeleye said the arrests were as a result of the joint efforts of other security agencies as well as local hunters and the neighbouring states.

“We have collaborated with the other security agencies and the local hunters in Edo and Kogi states, and the collaboration has been successful. We paraded about 38 suspects today (Friday) on our ‘Operation Gbale Gbako’ and we will continue from now till January,” he added.