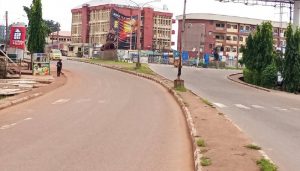 A recent report by SB Morgen Intelligence has revealed that residents of the South-East who adhere to the sit-at-home order of the Indigenous People of Biafra (IPOB) in the region do so due to fear of attacks and sympathy for the group’s cause.

The report, however, said it is unclear whether the level of compliance is a reflection of the group’s acceptability.

It shuts down economic activities in the region, adding that violators of the order are visited with violence.

On August 9, IPOB started the enforcement of the lockdown.

The sit-at-home order is to protest against the arrest and detention of IPOB leader, Nnamdi Kanu.

On August 13, IPOB stated that the Ghost Monday would no longer hold every Monday based on the directive from its leader, Kanu who said it should be observed only on the day he appears in court. But despite the suspension, the majority of South-East residents still observe the order, shunning business and commercial activities.

The SBM Intel survey interviewed 1,012 respondents across the five states of the South-East. Some of the respondents expressed passive support for the sit-at-home order because of their stated abhorrence for violence which has increasingly coloured IPOB’s tactics.

It was also discovered that more than half of the four age ranges — 18-30 years, 31-40 years, 41-50 years and older than 50 — admitted to having their productivity affected by the action.

However, only a few of them indicated that they were not in support of the protest.

“The responses showed a split population, with 464 respondents more supportive of the sit-at-home action, and 312 less supportive. 233 (23%) were lukewarm towards it. At the extreme ends of the spectrum, 29% are in full support, while 25% are not in support. Interestingly, five respondents opted not to answer this question at all, and all five refused to be drawn on an answer,” the report reads.

“Although IPOB has refused to take responsibility for any of the attacks on police stations, paramilitary agencies and individuals including the murder of former presidential aide Ahmed Gulak, the government has continued to blame the attacks on them.

“IPOB’s popularity in the south-east has been the subject of debate, as some believe that the group’s resort to violent tactics is serving to increasingly alienate them from people in the region. Even the group itself is no longer speaking with a single voice as evidenced by the fact that despite Emma Powerful’s statement ending the sit-at-home on 14 August, almost a month later, some people are still violently enforcing it.

“In March, an SBM report showed that there are various factions within the group. This is in addition to several other groups such as the Biafra Zionist Movement who have divergent approaches towards the same goal of establishing a separate and sovereign country called Biafra.

“Analysts resident in the region have told us that compliance should be seen as a combination of factors, most of which are public sympathy for the secessionist cause, consideration of personal safety and security in response to violent clashes between IPOB and security agents, as well as the group’s resort to brutality as a means of enforcement. They also believe that these factors at best contributed in no small measure to the ‘success’ of the sit-at-home order.”

He said those observing the IPOB’s sit-at-home directive, even when the secessionist group had cancelled it, were doing so out of panic.

“You know, the easiest thing to do is to carry a weapon and kill somebody, and that’s what happened in the past,” the governor had said.

“And that’s why, you know, some people in the South-east are afraid of coming out. So it’s not a question of compliance. It’s a question of fear.”