State of The Nation: Nigeria in Deeper Hole Than in 2015 – Sanusi 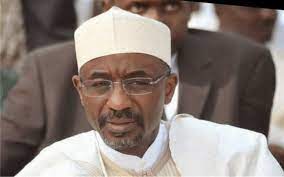 His Highness, Muhammad Sanusi II, yesterday, expressed his angst at the current situation Nigeria has found herself, insisting that the country is in a deeper hole and a bigger mess now, than it was in 2015.

The Khalifa of the Tijanniyah Sufi Order of Nigeria also warned that 2023 will be worse, compared to what we had in 2015.

The former governor of the Central Bank of Nigeria, CBN, also pilloried the current administration, saying that despite the current mess, the present leadership expects to be rewarded with appreciation after leaving office.

He spoke at the Akinjide Adeosun Foundation, AAF’s, Leadership Colloquium and Awards, Chapter 7, themed ‘Are Good Leaders Scarce in Nigeria’?

Yesterday’s event was its seventh which also marked the birthday of its founder, Akinjide Adeosun, husband of Olubamiwo Adeosun, Secretary to the Oyo State Government.

Speaking as the Special Guest of Honour at the event in Lagos, both physical and virtual, Sanusi lamented that “the levels of poverty, levels of insecurity, the rate of inflation, the unstable exchange rate, the lack of power” should worry anybody.

We’re in a complete mess

He said: “This is the only oil-producing country that is grieving at the moment when oil prices have gone up as a result of the Russia/Ukraine war. Our total revenue is not able to service our debt. And if anybody does not understand that we are in a complete mess, we are.

“We thought we had a big problem in 2015. But 2015 is nothing compared to what will happen in 2023. We have terrorism, we have banditry, we have inflation, we have an unstable exchange rate, and the worst thing is that those in leadership actually think we are going to thank them when they leave office, that we are going to appreciate them. There is no change.

There is no sense of urgency. If you are running a company and your sales revenue cannot pay interest, you know you’re bankrupt.

“When the total revenue of the Federal Government cannot service debt? And we are smiling. These are the kinds of questions we need to ask. And the reality is that there are so many Nigerians, who, given the opportunity will do well but they simply cannot contest in that space.”

Lack of vision by leaders

Sanusi hinged the challenge on the lack of vision of some of the country’s leaders.

The vast majority of those in office have a vision that is limited to the next election. It is to win. And when you’ve won, you’ve reached a destination, not a journey.”

He told his audience that the vision of General Yakubu Gowon cascaded down.

He used his days at Kings College and the type of bonding that existed between and among students of different tribes and religions as an example of a vision for unity, explaining that 90 per cent of his friends are from other tribes and are in Lagos. He wondered why the framework and mindset of unity remain missing in the country.

In a veiled reference to the raging controversy over a Muslim/Muslim ticket, he said: “We are going into an election. What are we talking about? North and South, Muslim and Christian? Is that really what we are concerned about? Does it matter if you have a government made up of 100 per cent incompetent Muslims or 100 per cent incompetent Christians? Will that government work? Yes, we must think of diversity and we must begin to think of fairness in this country and balance, not create any tension.

“How many people can go to a political party and bring out tens of millions of dollars to pay delegates? Where are you going to get the money and when you get the money, assuming you raise it from people, how are you going to look at the people when you are in office and do the right thing? You’re already finished; you’ve already sold your conscience to get there. Or when a nation is ready to sell itself; when the poor people on the streets are ready to be given N5,000, N2,000, and cast a vote for N2,000 today and give up education, give up healthcare and give up security for the next four years?

“Then, maybe we understand what Chief (Obafemi) Awolowo meant when he said a nation gets the leadership it deserves. We, as Nigerians, need to ask these questions.

Why I keep criticising people

“People say to me, ‘why do you keep criticising people? Why do you keep talking about public policy?’ And I say I was a public officer and I have a record – talk about my record. I met inflation at 15.6 percent, left it at 7.8 percent. I stabilised the exchange rate; I saved the banks. I transformed the payment system.

“I have my record. And because I had the opportunity to serve, I served and I left a record, so, I’ve earned the right to criticise any public officer who is incompetent and I’ll call him out. I think we need to start calling out incompetence.”