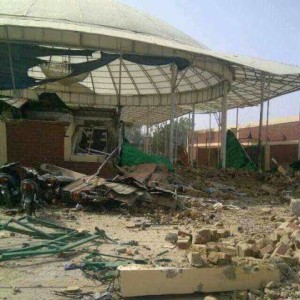 The Nigerian Army said it has arrested Sheikh Ibraheem Zakzaky, leader of Shi’ite Islamic Movement in Nigeria and his wife following the crackdown on the sect’s headquarters in Zaria, Kaduna State.

The military said in a statement on Monday that the sect leader’s wife, Zeenatu is alive contrary to the Movement’s earlier claim that she was killed along with several others in Sunday’s assault on its headquarters.

“The Shi’ite leader and his wife are safe and in protective custody even though I do not know how many wives he has since it was reported that his wife is dead and in the course of time, he, himself, will be speaking to his members,” said General Officer Commanding 1 Mechanised Army Division, Kaduna, Major Greneral Adeniyi Oyebade at a press conference in Kaduna.

“Just after Mr President (Muhammadu Buhari) left Kaduna to Abuja after a successful official visit, I decided to go to Zaria to meet up with the Chief of Army Staff, Lieutenant Tukur Buratai who was to pay a courtesy visit on the Emir of Zazzau and also attend the PoP of our recruited in Deport Nigerian Army.

“He (COAS) was coming in from Dutse, because that same week we held the COAS conference in Dutse in Jigawa State. He got to Zaria at about 14.30 hours (2.30pm) and the advance security team had cleared the road up to and including the city center, there was no problem, the same security team made a u-turn to now bring in the COAS’s convoy which is our normal security routine whenever we are escorting our boss.

“But shockingly enough, members of the Shi’ite sect led by El-Zakzaky blocked the Sokoto road to be precise and we found out that that was unusual, but because we thought that they were being overzealous so two senior officers in the CAOS’s convoy came down from their vehicles appealing to these hoodlums to please clear the road so that the COAS can go ahead with his scheduled programme.

“All entreaties, appeals to this Shi’ite sect members numbering in their hundreds refused to budge. It got to the point that they started throwing dangerous missiles, stones, machete and all kinds of traditional or crude weapons I would say on the COAS convoy.

“It was at that point that it dawned on the security forces especially the bodyguards of the Chief including our quick response group stationed in Zaria that this was not something that happened spontaneously, it was in our calculation pre-meditated and of course whenever any VIP or any facility that is under our charge, we must secure that person or the property, in this case, the COAS, and it came to the quick conclusion of the security forces that the life of the COAS was under threat and they had no other option than to force their way through the blockage including the use of lethal weapons.

“That is allowed within the rules of engagement, as if that was not enough, as he was moving through, they were  mobilizing in their hundreds, thankfully, the COAS was able to wade through these  hoodlums and went on to pay homage to the Emir before getting to Deport Nigerian Army.

“While this was going on, recall I said we had just seen off the president in company of the CP, I got a report from my commanders in Zaria of what was happening and of course, I started racing to the scene to find out exactly what was happening. But thankfully, by the time I got there the COAS had passed through, but then, we got reports that the Shi’ite members where mobilizing across Zaria in their various enclaves, shrines or what have you.

“As the GOC of 1 Division I take that very seriously that the life of the COAS is under threat and within the rules of engagement permissible by law, I had to bring the forces available to me to bring the situation under control and that was exactly what I did, but because we are operating in a city, we also informed the police of what was happening and they also provided the mobile police force to be able to restore law and order.

“My initial orders to the security agencies were just to keep everywhere cool and calm but little did we know that we were in for the bloody night. As you all know, the Shi’ite members numbered in their thousands and they were mobilizing and attacking security forces across Zaria.

“Again within the rules of engagement, we had to use the force available to bring it down and that was exactly what did, quite a number of our security forces were also casualties in this dastardly act by the sect so also some members of the Shi’ite sect and because of the report we had that they are mobilizing at their three key strong points including the big temple called the Hussaniyya, the area occupied by the sect leader in Gyelleus and another temple somewhere on Danbo road, I decided that I have to bring the situation under control by securing those three sites,” he said.

Meanwhile, the Shi’ite claimed in a  statement issued on Monday that  Sheikh Zakzaky has been taken to an unknown place.

The statement signed by Ibrahim Musa, President of Media Forum of the Islamic Movement in Nigeria, said a source confirmed to them that the cleric is still alive.

He said; “a source has confirmed that the Army has taken the revered leader of the movement, Sayyid Ibraheem Zakzaky (H), from his house this morning (Sunday) and is receiving treatment for injuries he sustained during the attack.

“There are hundreds of others that have received various degrees of injuries that are in need of assistance, but are currently being denied access by the soldiers on ground who are in a killing spree, shooting anyone identified as a member of the movement.”

“We wish to state here that some of those earlier declared dead through various sources might not have been killed but might be severely injured and in need of assistance. Members of the movement should be allowed immediate access to Sayyid Ibraheem Zakzaky (H) as a mean of taming the situation from aggravating unnecessarily.”

The statement called on the international community and peace loving Nigerians to intervene in stopping what it called the massacre of their members.