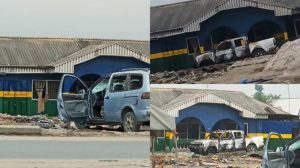 The hoodlums attacked a police station along the Rumuji axis of the East-West Road in the state. The Rumuji police station in Emuoha Local Government Area was also torched, two policemen feared killed, while some vehicles were burnt.

They also attacked a police checkpoint at Ogbakiri junction in the Emuoha LGA with two policemen feared killed and a vehicle burnt.

A checkpoint of the security outfit called C-4-i along the East-West Road was also attacked, even as three operatives were feared killed there.

Spokesman for the State Police Command, Nnamdi Omoni, confirmed the attacks but said he would make details available after visiting the areas attacked.

Meanwhile, the State Commissioner of Police, Eboka Friday, is leading a team to the place to assess the level of damage and actual number of casualties.

“Yes, that is what we heard. I am on my way to the place. I want to confirm it myself,” the police chief said.