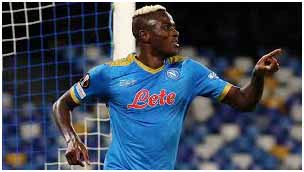 The Italian FA has begun an investigation into the racist chants against Napoli striker, Victor Osimhen, by AS Roma fans in their Serie A goalless draw on Sunday.

The fiery clash saw the coaches of both teams sent off – Jose Mourinho during the match and Luciano Spalletti after the match after he applauded the referee. 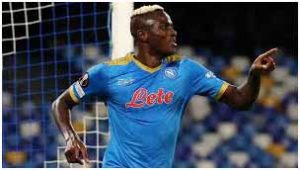 According to reports in Italy, fans targeted racist chants towards the Nigeria international, who was bullish during the entire duration of the match, twice hitting the bar and having goal disallowed for offside in the 88th minute.

In a ruling by the FIGC on Monday, Roma were fined €10,000 for their fans making ‘territorial discrimination’ chants against the city of Naples.

The FIGC said in its statement that a “racially-motivated discriminatory chant” was aimed at Nigeria striker Osimhen and that its disciplinary authorities would be conducting “further investigations” to determine both how many people chanted the unspecified abuse and how long they did it for.

Osimhen, along with teammates Kalidou Koulibaly and André-Frank Anguissa were earlier this month racially abused by a Fiorentina fan after Napoli’s 2-1 win at the ArtemioFranchi Stadium.

The fan was been banned from the stadium for five years. Italian football has been plagued by racism this season.

In September, prosecutors opened an investigation into alleged racist chants by Lazio supporters directed at AC Milan midfielders Tiemoue Bakayoko and Franck Kessie, while Juventus were forced into issuing an apology after their women’s team account tweeted a picture containing a racist gesture in August.