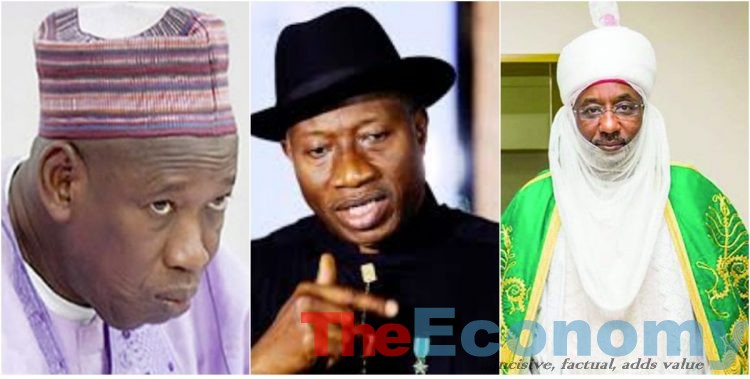 The Kano State Government appointed Lamido Sanusi as the 14th Emir of Kano in 2014 to spite the then President Goodluck Jonathan, Governor Abdullahi Ganduje has said.

The Kano governor spoke Tuesday at the public presentation of a book written by a journalist, Bonaventure Philips-Melahon, on the former president Goodluck.

Mr Ganduje, who was the deputy to the then Governor Rabiu Kwankwaso at the time, said the government knew that Mr Sanusi did not deserve to be the Emir of Kano. 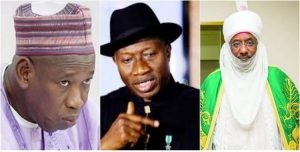 Mr Sanusi had, at the time, been suspended as Governor of Central Bank by Mr Jonathan following his allegation that $20 billion was missing from the records of the Nigerian National Petroleum Corporation (NNPC).

The money, he had said, was from crude oil exports by the national oil company between 2011 and 2012 that was not remitted to the Federation Account.

Mr Sanusi is a member of the Dabo royal family and became the 14th Emir of Kano from the Fulani Sullubawa clan following appointment on June 8, 2014, after the death of his uncle, Ado Bayero.

He was, however, dethroned on March 9 by Mr Ganduje for alleged insubordination and disrespect for constituted authorities.

“Mr Sanusi was not the best man for the throne at the time. He was appointed in June 2014 to spite former President Jonathan.

“He was appointed in order to prove that what Jonathan did to him was wrong and that the people of Kano wanted their son as Emir and therefore they decided to appoint him as Emir.

“But when he was appointed, there were a lot of demonstrations with people burning tyres here and there. But because of government backing, he was sustained on the stool.

“When I became governor, (that’s why you will laugh), I said yes, the Jonathan medicine is an important medicine

“So I took my Jonathan medicine and decided to save the system, to save the institution and I applied it effectively. So Jonathan and I are on the same page. Actually, I have no regrets” the governor said, apparently alluding to his controversial dethronement of Mr Sanusi.