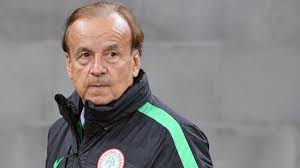 The two youngsters are based in the European country and Rohr is ready to have them train with his team next month.

Tijani, who captained Nigeria to the 2019 Fifa U17 World Cup in Brazil, is plying his trade in the Austrian Bundesliga with Hartberg, whom he joined on a season-long loan from RB Salzburg in August.

On Sunday, the 18-year-old midfielder was sent off in a league game after receiving two yellow cards in his team’s 2-0 loss against Wolfsberger AC.

Lawal, however, has featured for the Austria U19 and U20 teams previously – his country of birth – but he is still eligible to play for the three-time African champions.

The 20-year-old plays for LASK in the Austrian top-flight but he is yet to play for the first-team this season.

“I invited two players from Austria. One of them you know him, Samson Tijani. He was the captain of our under-17 team that played the World Cup last year,” Rohr told ESPN.

“He signed for Red Bull Salzburg, he is also midfielder 18 years old and he’s on the loan to TSV Hartberg, a first division club. But I’m not afraid to invite him especially because he’s in Austria already.

“Also, the goalkeeper, Tobias Lawal. He’s a young goalkeeper, playing in Linz. He was on the bench for the European games.

“They had a very good European rally last year, they made it a good competition. And he played already sometimes, he was already in Austria’s under-20 [side] but only a friendly.”

The Super Eagles battle Ivory Coast on October 9 before facing Tunisia on October 13 in Austria. The games would be Nigeria’s first outing since their 4-2 win over Lesotho last November in the 2022 AFCON qualifiers.