The Revenue Mobilisation Allocation and Fiscal Commission (RMAFC) has proposed a 3.33% reduction of the statutory allocation to the Federal Government.

It however proposed increase of allocations to States and council areas by 3.07% and .44% respectively.

The new adjustments to the revenue allocation formula due to the Federating units are contained in a report presented to President Muhammadu Buhari on Thursday by the RMAFC at the Presidential Villa, Abuja. 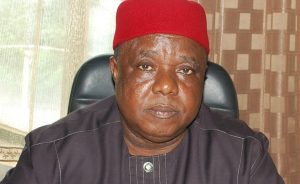 Receiving the report from the Chairman of the RMAFC, Engr. Elias Mbam, Buhari said he would await the outcome of the ongoing constitutional review process before presenting the report of the review of the vertical revenue allocation formula to the National Assembly as a Bill for enactment.

According to a statement by his Special Adviser on Media and Publicity, Mr. Femi Adesina, Buhari said: “Ordinarily, I would have gone ahead to table this report before the National Assembly as a Bill for enactment.

“However, since the review of the vertical revenue allocation formula is a function of the roles and responsibilities of the different tiers of government, I will await the final outcome of the constitutional review process, especially as some of the proposed amendments would have a bearing on the recommendations contained herein.”

Buhari listed some of the proposed amendments in the report as follows: “Establishing local government as a tier of government and the associated abrogation of the state/local government account; moving airports; fingerprints, identification and criminal records from the exclusive legislative list to the concurrent legislative list, empowering the RMAFC to enforce compliance with remittance of accruals into and disbursement of revenue from the Federation Account as well as streamlining the procedure for reviewing the revenue allocation formula,” he said.

The President assured members of the Commission the Federal Government would immediately subject the report to its internal review and approval processes, while awaiting finalization of the efforts by the National Assembly.

According to the President, this strategy, rather than issuing an Executive Modification order, as was done in 1992, is more in line with entrenching our democratic tenets.

He commended the RMAFC for a job painstakingly done, pledging his unwavering commitment and support to them in carrying out their constitutional mandates.

The President also thanked Nigerians, especially the State and Local Governments, for making their inputs through the broad stake-holder engagement processes that produced the report.

Mbam said the leading philosophy behind the proposed review was guided “by the need for distributive justice, equity and fairness as enshrined in relevant Sections of the 1999 Constitution.

He added that the principles took into cognizance the indivisibility of the country, public opinion and weighted Constitutional responsibilities and functions of the three levels of Government.

In arriving at the new vertical revenue allocation formula, Mbam told the President the commission had wide consultation with major stakeholders, public hearing in all the geo-political zones, administered questionnaires and studied some other Federations with similar fiscal arrangements like Nigeria to draw useful lessons from their experiences.

According to the RMAFC chairman, the Commission also visited all the 36 States and the FCT, the 774 Local Government Areas to sensitize and obtain inputs from stakeholders.

He added that literature reviews were conducted on revenue allocation formula in Nigeria dating back to pre-independence period while the Commission received memoranda from the public sectors, individuals and private institutions across the country.

Explaining the major reasons for the exercise, Mbam noted that since the last review was conducted in 1992, 29 years ago, the political structure of the country has changed with the creation of six additional States in 1996, which brought the number of States to 36.

He said the number of local governments councils also increased from 589 to 774.