The Rivers State police command has said its operatives have arrested four persons, including members of an armed robbery syndicate terrorising residents of Rumuagholu Estate in Obio/Akpor Local Government Area of the state. 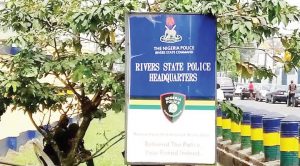 The acting spokesperson of the state police command, Grace Iringe-Koko, disclosed this in a statement issued in Port Harcourt on Friday.

Iringe-Koko said the suspects operate in broad daylight, harassing and dispossessing people of the area of their properties, saying the operatives swooped on them following a distress call.

The statement reads, “Operatives of the Rivers State Police Command, reacting to a distress call from residents of Rumuagholu Estate in Obio/Akpor on Thursday 7th April 2022, have successfully arrested two members of an armed robbery syndicate that have been harassing and dispossessing the people of their properties.

“The two suspects Wisdom John, 20, and Anietie Stephen, 26, were apprehended, while two others narrowly escaped.

“Items recovered at the scene include various laptops and phones stolen from the residents, as well as a Volkswagen Golf Car with Reg. No. AH 757 NEM, which was used for the operation by the suspects. Investigation is ongoing to arrest other fleeing suspects

“Similarly, operatives of the command arrested two suspects for receiving a stolen ash-coloured Honda Accord belonging to the Rivers State Government. The vehicle, which was snatched at gunpoint by four armed men, at D/Line Port Harcourt, on the 3rd of April, 2022, was recovered around Abuloma axis in Port Harcourt by the officers.

“The suspects, one Saidu Adamu aka Alhaji Sani, 30, and Mohammed Sani, 62, were arrested in possession of the stolen vehicle in the evening of the same day,” the statement added.

The statement said the Commissioner of Police, Friday Eboka, assured that investigations would be concluded on both cases and charge the suspects to court, adding that the fleeing suspects would be apprehended.

“He equally encourages members of the public to come forward to claim their stolen properties, with proof of ownership where necessary,” the statement said.