Revealed: How Nkurunziza sneaked back into Burundi

Dramatic details of how embattled Burundi President, Pierre Nkurunziza sneaked back into his crisis-torn country from Tanzania has been revealed.
According an unverified account given by Tanzanian newspaper, The Citizen, Mr Nkurunziza followed unfamiliar route to return to his country home of Ngozi before heading back to Bujumbura, the country’s capital last Thursday night to regain power after an attempt to overthrow him crumbled.

Sources in government and in security circles disclosed that the ‘third-term-seeking’ President was desperate to return to Burundi at the height of the power-change crisis and reportedly turned down an offer for asylum in South Africa.

Nkurunziza was in Dar es Salaam last Wednesday for an East Africa Community Heads of State Summit on the crisis in Burundi when renegade army generals and police staged a coup against him. And soon after the news of the coup broke out, the summit was called off. 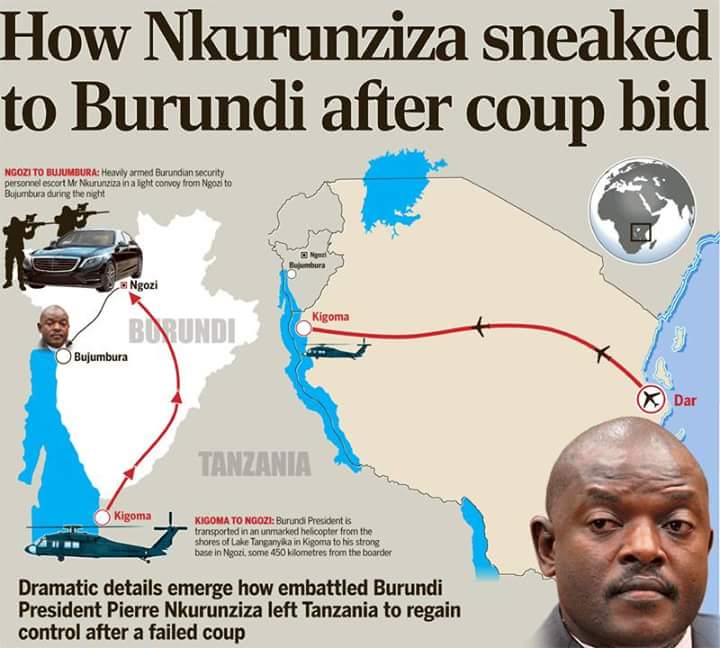 Although Mr Nkurunziza quickly issued a statement denying that he had been toppled by the coup plotters, his attempt to fly back to Bujumbura last Wednesday evening failed with his flight aborted midair following the closure of the airport in his country’s capital by the renegade soldiers.

Back to Dar es Salaam, Mr. Nkurunziza and his loyalists began to perfect new plans to smuggle him back to the country to regain the levers of power.  By early last Thursday, the Burundi helmsman had disappeared from his base-camp hotel in Dar es Salaam with his whereabouts a subject of media conjectures during the day until he twitted of his successful re-entry into Burundi and regaining control of the government.

Sources familiar with what transpired disclosed that Mr Nkurunziza spent most of last Wednesday night in a marathon meeting at the State House with President Jakaya Kikwete and a team of his top security advisers. It was during the crisis meeting, they perfected new strategy to respond to the fast changing political development (coup d’etat) in Bujumbura.

It was at this meeting that Mr Nkurunziza reportedly declined an offer from South Africa for asylum, explaining that things would deteriorate in his country in his absence. He wanted to get back to calm his supporters and end the violence. “He told his host that the onus was on Tanzania to ensure that he returned home safely. He dismissed the coup and said all was alright inside his government,” said one of our sources.

By last Thursday, the Burundi leader remained holed up at an undisclosed place from where he was driven to Julius Nyerere International Airport at 3pm for the first leg of his journey when his forces had regained an upper hand in the fighting. He boarded a plane that had been hired from South Africa and flew him to Kigoma town, on the Western part of the country bordering Burundi from where he was whisked off aboard a helicopter to his home turf region of Ngozi.

The helicopter under the command of senior intelligence officers was designated as civilian and covered a distance of about 450 kilometres from Kigoma to Ngozi. Here, Mr Nkurunziza was handed to an advance team of his security and intelligence officers who had been dispatched from Bujumbura; and pronto, he was back into power.

By Olisemeka Obeche (With Agency Reports)