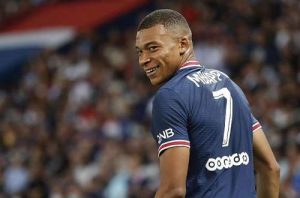 Real, who lost 300million euros in revenue because of Covid-19, have only signed defender David Alaba on a free transfer from Bayern Munich this summer.

However, this summer Sergio Ramos left on a free to PSG, while another high earner Raphael Varane was sold to Manchester United for £34million and Martin Odegaard left for Arsenal for around £30million.

Real evidently feel sufficiently confident about their finances to make an approach for one of the most highly-rated players in the world.

It is not known how the fee would be structured.

PSG, who have not yet responded to the bid, signed Argentina forward Lionel Messi earlier this month after he left Barcelona.

If Real are successful, it could trigger a number of deals before the transfer deadline at 23:00 BST on Tuesday, 31 August.

It is known Cristiano Ronaldo’s future at Juventus is uncertain and PSG are thought to be interested in the Portuguese, which raises the intriguing possibility of a link-up with Messi, his rival for the world’s best player for well over a decade.

Manchester City are among the clubs to have been offered Ronaldo but are not thought to be interested in a deal.