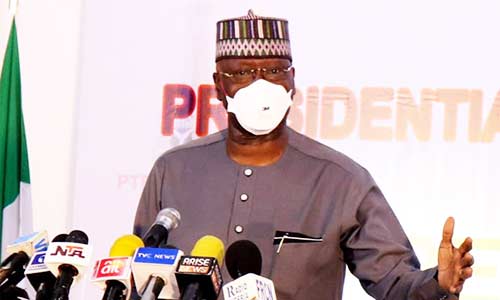 Ahead of Nigeria’s 60th independence anniversary, the Presidential Task Force on COVID 19 may launch a National Testing Week Programme to underscore the importance of ramping up the numbers to flatten the curve.

The Secretary to the Government of the Federation and Chairman of PTF, Mr Boss Mustapha, who hinted at this during the routine media briefing of the Task Force,  said the outfit would also be intensifying risk communication and community engagement.

He expressed appreciation for the progress made in containing the pandemic but he called for extra vigilance, especially now that some restrictions have been relaxed, airspace reopened and schools are resuming for academic activities.

The SGF,however, bemoaned the lacklustre attitude to Coronavirus Test by some of the sub-nationals despite the huge support given to them by the Nigerian Center for Disease Control, the Coalition Against Covid-19, the World Bank and other bodies.

According to him, no state can justifiably complain of lacking in resources, as the national response is targeted at supporting them to embark on massive testing in order to help in flattening the curve.

In addition to the whopping sum of N30,540,563,571.09 which the Federal Government said it spent in combating the pandemic in four months, the World Bank Board of Directors had also. in August,  approved a $114.28 financing to help Nigeria prevent, detect and respond to the threat posed by COVID-19, with emphasis on testing at the state-level.

While commending the 12 states that are active in testing for Coronavirus, he urged the others to rise to the challenge by prioritizing the exercise.